London, July 31: Protest at US Embassy 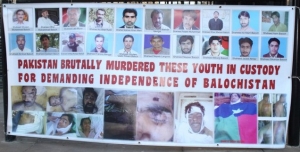 London: Release: Join in the Protest and Appeal to the International Community for Intervention against Pakistan's Atrocities against the Baloch People in Balochistan.

* In July alone, through 23 July, 22 mutilated bodies of Baloch people have been found

* A brutal army operation is continuing in Balochistan since 2004

* Baloch and Sindhi leaders have been target killed, arrested and humiliated since then

* Eight thousand Balochs and scores of Sindhi people are missing