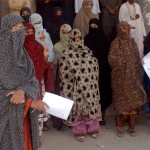 QUETTA: Another bullet-riddled dead body of a kidnapped Baloch lawyer, Ali Sher Kurd, was found from a desolate place in Khuzdar district, some 300-kilometer in southeast of Quetta, on late Thursday night, officials confirmed.
Ali Sher Advocate had been whisked away by unknown armed men from Quetta city three days ago.

According to official sources, some passers-by spotted a dead body in a desolate area of Ibraim Road of Khuzdar and informed the police. The body was taken to Divisional Headquarters Hospital Khuzdar for autopsy where a written letter left with the body which indicated the name of the slain lawyer.

“The victim received single bullet in his forehead which passed through his skull,” Dr Sumar Khan told The Baloch Hal, via phone. He said the body wore marks of wounds and the victim was brutally tortured before being killed.

Lawyers and activists of the Baloch Students Organization (BSO) reached the hospital soon after being informed about the recovery of a dead body. Students also took to the streets in protest against the killing of Baloch lawyer what they alleged was in illegal custody. All the shops in Khuzdar and Kalat districts were closed and business activities remained paralyzed for the day. The enraged protesters also pelted several vehicles with stones and blocked the RCD highway disrupting the flow of traffic between Quetta to Karachi for several hours.

The body was later on shifted to his ancestral town Mach in Bolan district where he laid to rest.

According to official sources, 16 bullet-riddled dead bodies have been recovered from different places of Balochistan since July 24, 2010 and all of them were killed in similar manner.

The body of Ali Sher Kurd was recovered when Balochistan Bar Association was observing a province-wide boycott of court proceedings demanding his safe recovery.

“We were already on strike for safe recovery of Ali Sher Kurd and Mir Ahmed Mirwani advocate but now we will extend our protest,” President of BBA, Baz Mohammad Kakar told this scribe. He said it was the second such incident in which a lawyer was killed in a brutal manner.

“Lawyer Munir Ahmed Mirwani is still missing and in such circumstances there is possibility that the culprits will throw his body soon without fear of being punished,” he added.

Responding to a query, Baz Kakar said that family members of kidnapped lawyers accuse security forces and intelligence agencies of killing and hostage taking. “If the institutions are not involved in hostage-taking then they must clarify their positions because it is their prime responsibility to ensure the safety of life and property of the people,” he said. The lawyers will announce future course of action soon in this regard, he added.

Lawyers throughout Balochistan have been protesting against the killing and hostage-taking of lawyers for the past two months. Three lawyers Munir Ahmed Mirwani, Zman Mari and Ali Sher Kurd had been whisked away and two bodies were found so far. Munir Ahmed advocate have been missing for three months and police yet to trace his whereabouts.

Earlier, bullet riddled body of Zaman Marri was found from Mastung, 50-kilometer from here, Zaman Marri was kidnapped by a group of armed men from Jinnah Road of Quetta when he was returning home from his office on July 19.

The Chief Justice of Balochistan High Court also had taken suo-motto notice of kidnapping of lawyers but no progress has been made till the date.