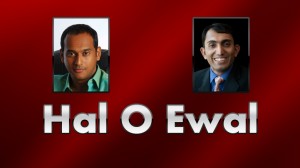 In the first series of exclusive interviews with The Baloch Hal, we bring you fascinating stories from across the globe of successful, inspiring and struggling leaders. Read the life stories and thought-provoking ideas of several outstanding international students, professionals, young leaders and role models presently striving to make a difference in the US and other countries of the world.

As a part of the Hubert Humphrey Fellowship program, Malik Siraj Akbar, the editor of The Baloch Hal, meets people from different parts of the world during his ten-month stay in America and shares enthralling stories.

In the first interview, we introduce you with Chevaan Daniel, the young Chief Executive Officer of Sri Lanka’s largest electronic news media network, News 1st. Chevaan, who is also a Hubert Humphrey Fellow at Walter Cronkite School of Journalism in Arizona State University, recalls his journey and experiences in the United States. Excerpts:

The Baloch Hal: Tell us about your family background.

Chevaan Daniel: I belong to a very middle-class background. Born in 1978 as the eldest child of a Tamil father from northern Sri Lanka and a Sinhalese mother of south, I was raised in Colombo, the national capital.


TBH: How did your parents’ thinking shape your personality?

CD: My dad is a hard disciplinarian who inculcated a sense of discipline, determination and dedication in my personality.

My mom, on the other hand, was a very sensitive person and she inculcated values such as caring for people through thick or thin. I also learned my love for music from my mother. My sister, whom I am very close to, gave me a sense of balance, since she’s a deep thinker and sees things very differently. Both my parents were responsible for my Christian upbringing, which is the foundation of all I do.

TBH: What were your childhood hobbies?

CD: I did every single imaginable thing in my childhood. I always considered myself a jack-of-all-trades but master of none.

I got involved in every thing like sports, music, studies and adventure. I’d almost have a new ambition every other day. Varied interests helped me learn something of every thing throughout my life.

TBH: What was the turning point in your life?

CD: I did not have a specific turning point in my career. I was never a remarkable achiever in my college which was extremely competitive. I would have to work five or six times harder against my counterparts in studies and sports.

After I finished my A Levels in 1997 from Saint Thomas College, which is a premier institute in Sri Lanka, I went to the Institute of Technological Studies for my university degree.

TBH: How did you start your career?


CD: When I was eighteen, I wanted to achieve financial independence as far as possible. Together with my best friends I pioneered an e-commerce company, eezee2.com, way back in 1998. It was the time when I even did not have a computer of my own but I realized that the Internet was going to be the future of communication. This was Sri Lanka’s first classified advertisement website which offered people free advertising services. It progressed quickly and turned out to be a very successful venture. Encouraged by this success, we started Sri Lanka’s first SMS news service in 1999.

While doing all of this, I also headed the Media department at the Sri Lanka cricket board in 2000 and was in charge of all media related arrangements for the ICC Champions Trophy in 2002. At a very early age, I understood what it was to be responsible for a team. And what it took to be a leader. I failed many many times. I was laughed at. I was ridiculed. But all that was experience.


TBH: How did the journey from your own website take you to the position that you hold today?


CD: Our venture helped us build contacts. A friend of mine who worked at a radio station, which is owned by the same company that I work for now, suggested that I join them as a newsreader.

Too confident of having a good voice, I failed the initial voice test at the radio.

Yet, I started working with the company in 1988 as a translator typist in the newsroom. Subsequently, I was asked to read the news on radio and then on television. I always wanted to be in the management side of the company.

As soon as I graduated, I started working for Pepsi Cola as a key accounts manager. I also worked at Victoria Secrete for two and half years. It was an amazing experience working with an international brand.

In May 2005, my boss Mr. Rajamahendran invited me to join the Capital Maharaja Organization as the head of the English Channel. He was instrumental in guiding me and giving me opportunities right along and I eventually ended up heading the 7-channel news network.

TBH: How big is the Maharaja Company?

CD: The Company, which is over seventy years old, is Sri Lanka’s largest privately owned company. Mr. Rajamahandran, whom I see as my guru and mentor, is the chairman of the company.

TBH: What is your definition of a leader?

CD: An Indian professor once said: “A leader is a sheepdog.” The three things that define a sheepdog are: You are always behind the flock; you are not in the front; you never lose a sheep; you know where you are going and there is a fourth quality: you bark; you don’t bite but you have to be prepared to bite if there is something that tries to meddle around with your sheep.


TBH: How does it feel to be a CEO at this age?


CD: I don’t consider myself as a big achiever as there are much bigger achievers in this world. I believe fame can turn into shame in seconds. For me the best contribution I can make is if I inspire someone to become a leader. Someone took the time to nurture me and I’d like to do the same for someone else to become a future leader.

TBH: Among all your achievements, which one are you specififcally proud of?


CD: In 2008, I won the Most Outstanding Young Person of the Year Award which is offered by Junior Chamber International. I was not expecting this prestigious award but was very thrilled to win it. It was a very humbling experience and the day I received the award was very special in my life.


TBH: How do you grapple with hard times?


CD: A leader has to be energized by hardships. You must almost enjoy the stress, pressure and failure. A rocket can’t ever fly into the sky until it has the fire beneath it. There has to be the constant conflict and fire for this thing to fly up in the sky. But my rock is my Lord and savior Jesus Christ. He has sheltered me in storms and given me wings when I least expected them.

TBH: Can anyone become a leader or is it a god-gifted quality to some special people?

CD: If you had asked my class fellows some ten years back if Chevaan could become the C.E.O. of a company, not one single person would ever say yes.

In some cases, one needs certain characteristics to accomplish a position. For example, I cannot become an American football player because you must have certain genetics to do so.

However, I believe, everyone can become a leader in their areas of expertise. To me, a leader is anybody who is willing to take responsibility and guide other people.

TBH: What are you looking forward to achieving during your Hubert Humphrey Fellowship here in the United States?


CD: I have certain goals for myself but I am not going to measure that in terms of achievements. I will measure my Humphrey year in terms of experience; the people I meet; the friends I make and the networks I create. I don’t want to waste a single moment of my time. I am looking forward to travelling and doing my professional affiliation with an American organization.

TBH: What do you intend to do when you return to Sri Lanak after completing your Humphrey year?

CD: I think I would fail as a Humphrey fellow if I don’t convince another Sri Lankan to win a Hubert Humphrey Fellowship next year(s). I would spread the word and share my experiences on my return about the fellowship among the Sri Lankan youth in order to ask them to build the criteria they need to get considered and selected for the program.


TBH: What inspires you about America?


CD: Obviously, it is the accent on innovation. Americans are a gritty nation. No one should underestimate this country. They have done – only in 300 years –what no other country has done in world history.

For instance, I find an aggressive drive towards innovation, entrepreneurship and the unknown among the students at the Arizona State University where I am attached as a Humphrey Fellow. This (behavior) is very American. Entrepreneurship, risk-taking and innovation are not very common – even among executives –in our part of the world.

I have seen the American students who are always trying to expand their horizons by doing different things. They take a year off and travel around the world. On the contrary, if I did the same in Sri Lanka, my parents and teachers would think I was crazy. In fact, such things enrich your personality and character when you leave your comfort zone and start doing something innovative and different.


TBH: How does interaction, say as a Humphrey Fellow, with people from different parts of the world, enrich your knowledge and experiences?


CD: I believe two minds create a third mind. When I meet international students and fellows, I encounter different opinions. I don’t take it as a negative thing. The fact that someone else sees or understands something differently helps me learn a new perspective.