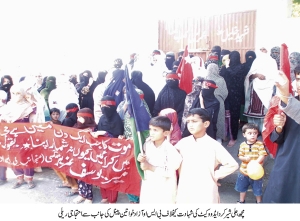 Occupied Balochistan: Hundreds of Baloch women and children gathered in Mach town of Balochistan to protest against the cold blooded murder of advocated Ali Sher Kurd by Pakistan intelligence agencies. BSO-azaad women wing had given the call for protest demonstration. The protesters gathered at Shaheed Khalil Press Club in Mach before passing through the main bazaar of the town. As the protesters marched toward the Press Club the city echoed with slogans of FREEDOM. The Baloch female protester also chanted slogans against Pakistan and state sponsored terrorism.

Addressing the participants of demonstration in front of Press Club Banok Sakeena Baloch said that Ali Sher Baloch was ill and staying at his home when the Pakistan security forces, while violating the sanctity of the house, arrested him and made him disappeared. They later threw his brutally tortured body in Khuzdar. She further said that Mr. Kurd always wanted to make the Baloch national struggle stronger on scientific basis. He was preparing Baloch youth ideologically to be part of the struggle for liberation, she added.

A cousin of Ali Sher Kurd while shedding light on the early life of the Baloch columnist and lawyer said that, “he was against injustice and exploitation when he was still a student. He started his struggle from the platform of BSO; he had even raised voice against negative action among his circle of friends. He was ambitious to become a great leader of Baloch Nation and was against Sardari or worn out tribal system”.

Banok Seema Baloch in her speech said that the struggle and sacrifice of Ali Sher was a source of inspiration for Baloch youth. She said Balochistan has been turned into and army and FC state; you can see Army and FC check post everywhere but there are one can hardly see the school buildings. Lawyer Ali Sher Kurd loved his mother land and he paid the debt of his country by sacrificing his life for Balochistan. She stated no matter how much barbarism the state commits against the people of Balochistan they would not give up their struggle for freedom. She said that more atrocities the state [Pakistan] commits the stronger the struggle for liberation will become.

The Baloch liberation struggle is shaping up like an ocean which will wash away the enemy forces and their paid agents, she added. Ali Sher Kurd wished to resist against the enemy but they took advantage of his illness. She appealed the Baloch Nation to keep arms for their protection. Several other Baloch women leaders also addressed the meeting.