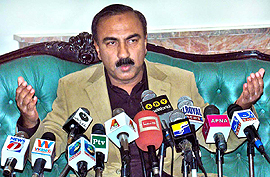 Acting like a typical military dictator, Prime Minister Syed Yousaf Raza Gilani has removed minister of state for defense production Abdul Qayyum Jatoi, from his position over speaking against the country’s military and the judiciary. The prime minister has reminded the entire nation that we still live in the age of ‘controlled democracy’ where “personal opinion” on core “sensitive issues” may prove to be very costly. The removal of the minister also implicitly demonstrates the ruling PPP’s displeasure for people like Jatoi who sympathize with the Baloch masses. It seems the PPP, which has a history of butchering the Balochs in 1970s, is left only with space for belligerent leaders like Rehman Malik.

What Jatoi said in Balochistan during his visit to the residence of late Nawab Akbar Bugti is in fact the shared feeling of all Balochs. These were not his personal views but the ‘collective views’ of the Balochs who feel the heat of a military operation in a new but more dangerous form. Never before did the Balochs receive the dead bodies of so many top lawyers, writers and political activists as they are experiencing at the moment.

The situation in Balochistan today is much worse than what it was during the military rule of Pervez Musharraf. The operation has been urbanized. The FC has made life miserable for the masses by expanding its network across the province. Opposition parties have vanished after the creation of anti-nationalist outfits that threaten to target political gatherings and democratic activities. The missing persons’ dead bodies are being recovered in highly humiliating conditions. How is the removal of a state minister going to restore order in Balochistan or regain the confidence of Balochs in the government? Party big guns in the PPP may silence Jatoi by employing various pressure tactics but how is the PPP government going to silence the whole enraged Baloch population that has even deeper and more provocative views than the sacked minister of state?

It is no secrete that the then army chief General Pervez Musharraf declared a war against the Balochs on the television: ” It is not the ’70s,” he said, ” we will hit you in a way that you won’t know what hit you from where.” If the military did not kill Nawab Bugti then who else did it? Pervez Musharraf has never been apologetic about the military operation he carried out in Balochistan. Similarly, the army officers were congratulating each other when the former Baloch governor and chief minister was killed. They only stopped showing their delighted faces once Bugti’s killing backfired. There was extraordinary condemnation from all over the country and abroad over the killing of a seventy-nine year old political guru. The killing was also followed by unprecedented violence, protest rallies and an irreversible sense of alienation among the Baloch youth.

There is genuine anger among the Balochs against the country’s judiciary which betrayed them after the historic lawyers’ movement. The only notion that kept on fueling the lawyers’ movement was the oft-repeated issue of the ‘missing persons’. The supporters of the sacked and now reinstated Chief Justice of Pakistan kept on insisting that the chief justice had been removed from his position because of his proactive interest in the cases of the ‘disappeared people’. In addition, they assured the masses that all the missing persons would return home once Justice Ifthakar Chaudhary was restored as the top judge of the country.

The Balochs feel no change in their lives even after the exit of Pervez Musharraf and restoration of Justice Chaudhary. The sons of Nawab Bugti, Jamil and Talal Bugti, have separately registered cases against Pervez Musharraf and some of his top aides. These cases have not made any headway inside the courts as the judiciary has become an equal partner in the crimes against the Balochs.

One can easily understand the pressure the civilian government is currently facing both from the military as well as the judiciary, a new player in the country’s highly polarized polity. Provocative remarks by cabinet members may jeopardize the very existence of the democratic government. But removing a minister who spoke in support of the Baloch masses will only send a negative message to the people of Balochistan. They would assume that the government favors the “holy cows” against the destitute Balochs.

Why was Rehman Malik not removed when he threatened to use the danda against Baloch people?