After passing one year of Mohammad Saber Malikraisi's illigal detention, it is now 4 months that there is no news about his fate. 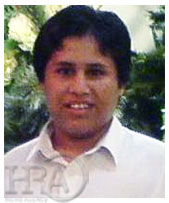 After passing one year of Mohammad Saber Malikraisi's illigal detention, it is now 4 months that there is no news about his fat.
According to the reporters of Harna, Mohammad Saber Malikraisi son of Molavi Dadrahman Sarbazi, who is 15 years old and a resident of Sarbaz district of Baluchistan, had no contact or meeting with his family since last 4 months with the charge that his older brother is communicating and cooperating with the Baluch armed opposition.
Mohhamad Saber Malikraisi was arrested on Thursday 24 September 2009 ( 2 Mehr 1388, Irani calendar), with his other two brothers in Chahbar, and after the intelligence and security agents raided the house of Mohammad saber's father, while searching the house they threatened the family if Mohammad Saber's older brother is not brought to them then they will execute (hang) all three of his sons who are in the custody.
After 4 months of his detention his older brothers were released, but 15 years old Mohammad Saber is held hostage in prison and during forced phone calls to his family they wanted him to tell his family that he will be executed soon.
During the last 4 months his family has referred to the Intelligence, prison and the court, but every time they were rejected to meet their son, and this has increased to their concerns whether Mohammad Saber is still alive or not.
It is worth mentioning that in his Television confessions he introduced himself and his brother as member of Jundullah (Baloch People Resistance Movement) and so he has been severely tortured.
Translated by Sarbaaz Baluch
Source: Harna