In Pakistan, journalist join police to beat up protesting Baloch 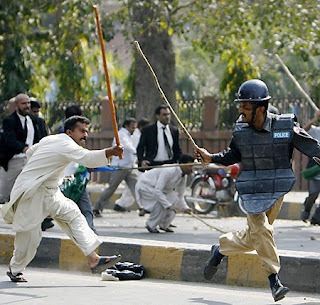 Bringing shame to the worldwide community, Pakistani journalist allegedly joined the Pakistani police to beat up Baloch student protesters. As per the sources, the Islamabad based journalists boycotted the protest by Baloch Student Organisation, which was staged a protest on Monday at National Press Club (NPC) to condemn the abductions of 8,000 Baloch activists, torture and subsequent murder of Ali Sher Kurd, a Baloch lawyer, writer and

The journalist allegedly used abusive language against the Baloch protesters and jointed Islamabad police to beat up the the Baloch students. Several of the students have been badly injured. The police lodged FIR against all of the student protesters.

Tributes were paid to the scores of Baloch martyrs and ‘missing persons’ who have been subjected to the worst forms of state brutality merely for speaking out in defence of the rights and dignity of the Baloch people.