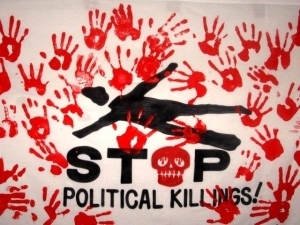 Occupied Balochistan: Six bodies were found in Sui, in Dera Bugti district, sources said. The spokesperson for the Baloch Republican Party (BRP) Sher Muhammad Bugti, said that a leader of the Baloch Republican Student Organisation (BRSO), Kohdil Bugti and his father Ali Baksh were among the dead. He said that all six who had been killed were Baloch. He identified two other bodies of Shah Baksh Bugti and Rahmdil Bugti, and the remaining two bodies as that of Bugti IDPs abducted from Punjab.

“Kohdil and his father were whisked away around three months ago,” he told the media, while accusing security forces of killings during illegal-detention.

Official sources confirmed that levies officials did not go to the area for search and recovery of the bodies for unexplained reasons. The bodies were found in the troubled area, local Bugti tribesmen claimed.

When Tehsildar Shahnwaz was contacted, he said law enforcers had gone to the crime scene, but so far no one had returned. “I can not confirm that six bodies were found,” a terrified official said.
Another body was discovered near the mountainous area of Turbat, and was later identified as that of Muhammad Saleem. The victim belonged to Karachi and had been listed as missing a few weeks ago.

The body of a 23-year-old man was found near the Killi Almas area of Quetta. Police took the body to the Sandeman Hospital for autopsy. “The victim was tortured and electrocuted,” sources at the hospital said. However, his identity could not be ascertained till this report was filed.

Bullet-riddled bodies of missing persons are frequently found in the province. Families of the victims blame the security forces of abductions and killings.

Recently, the victims’ relatives accused security forces and secret agencies of threatening them with dire consequences if they lodge cases against the forces over alleged extra-judicial arrests of the missing persons.

According to the Voice for Baloch Missing Persons as many as 100 Baloch missing persons have so far been killed at the hands of paramilitary troops and secret forces.