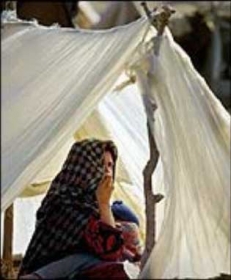 Spin Boldak: A Pakistani suicide bomber was apprehended in seriously injured condition by Afghan Police after he tried to blow himself up near the house of a Bugti Baloch refugee in the bordering town of Spin Bolkak in Afghanistan.

According to detail two Bugti Baloch were killed and three girls of the same family have been seriously wounded when a Pakistani suicide bomber attack their home in Afghanistan. One of the deceased has been named has Dur Khan S/O Gul Bahar Bugti.

The attacker has been arrested by Afghan police in critically injured condition. According to Afghan state media the bomber has admitted that he and several other suicide bombers have been tasked [by Pakistan] to attack Baloch refugees in Afghanistan. It must be noted that several Baloch families, mainly from Marri and Bugti tribes, have fled to Afghanistan after Pakistan (army) have attacked and destroyed their home in 2004, 2005, 2006 and 2007 military offensives. The military incursions are still ongoing in the several areas of Balochistan.

It is also pertinent to mention that in August 2010 the ISI sponsored death squad (Sepah-e-Shohada-e-Balochistan) had also threatened to attack Baloch activists in Afghanistan and other foreign countries.

Meanwhile Sher Mohammad Bugti, the central spokesperson, of BRP (Baloch Republican Party) while strongly condemning the attack on the house of Gul Bahar Bugti has said that the attack was carried out with the help of Pakistani agencies. Mr Bugti further said that he had informed the International Humanitarian groups and International Media that Pakistan was planning to target Baloch refugees living in Afghanistan. “The attack in Spin Boldak just confirmed our concerns that Pakistan is behind the attack”.

He said Pakistan was using fighter jets to bomb Baloch villages, using chemical weapons against Baloch civilian and mutilated and decomposed bodies of Baloch youth are being recovered on regular basis but the media is silent on such heinous crimes of Pakistan. He urged the International Community to take serous note of Balochistan issue and play their due role to help the Baloch Nation.