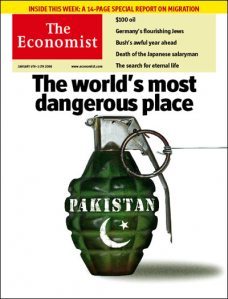 THE recently published 2011 BBC World Service Country Rating Poll, which surveys global perceptions about “16 major countries, plus the European Union”, has confirmed for many Pakistanis that they are getting the short end of the stick around the world.

According to the latest poll — the poll has been held every year since 2005 — while positive perceptions of 13 of the 16 countries increased from last year, Pakistan was among only three countries about which negative perceptions showed a marked upswing.

Overall, negative perceptions about Pakistan registered an average increase of five percentage points, making it the second most negatively viewed country of the 16 countries and the EU, just behind Iran. An average of 56 per cent of the global population surveyed (in 27 countries on all continents) feel “mainly negatively” about Pakistan’s influence in the world, which puts it, remarkably, slightly worse than North Korea, about which an average of 55 per cent had bad feelings.

Mexicans were more or less divided (29 per cent positive, 30 per cent negative), while even our steadfast allies, the Chinese, had a greater negative view of us than positive. Almost half the population of China (47 per cent) had a mainly negative view of Pakistan’s influence on the world while 37 per cent clung on to a positive assessment. Seems more like ‘deeper than the oceans’ rather than ‘higher than the Himalayas’ at the moment.

India is actually surprisingly lower than expected but take a moment to consider how many of the rest are our political ‘allies’, trading partners and donors. South Korea, another great investor in Pakistan, is only marginally less negative about us at 65 per cent. Japan does not have overwhelmingly negative opinions about us (a mere 37 per cent admit so) but then only six per cent of Japanese have something positive to say about us either.

The predictable establishment reaction to these results might be a defensive one — questioning the validity of the methodology and results and the diversity of the countries selected to be surveyed, pointing to the rising tide of Islamophobia in the West and the ‘bias’ of the western media which shapes it. Or it may be a foolishly patriotic one by claiming we don’t care what the world thinks of us and simply ignoring the results as irrelevant.

Both of these reactions would be self-defeating, because obviously it does matter to a country living on international handouts (or any country tied into a global economic system) what the world thinks of it. And let’s not forget that Pakistan has pretences of being a leading geo-strategic player.

But there is another response to these dismaying results that may be as problematic and which one fears will be promoted by those out to make a quick buck and those with little vision or imagination. And that is the PR blitz. You can almost sense that public relations agencies will be licking their chops at potential contracts and whispering into the ears of bureaucrats and politicians that the way out of this perceptual negativity is to counter it with positive images of the country.

This is the marketing mindset that believes that what is wrong with Pakistan is basically bad press and the corrective to it is promoting the ‘soft image’ of the country, the sufic roots of our heritage, the brilliant natural beauty or what have you.

Here’s a reality check for our potential spin doctors: marketing is an adjunct to a product, not the other way round. And the product we have on our hands currently is this: a lack of bearings, a fondness for rhetoric over logical analysis, cultural paranoia, an absence of a coherent vision for the future, a prioritisation of elite interests over what is better for the country as a whole, crumbling state institutions, bureaucratic inertia, a stunning lack of capacity to implement any plans that are actually made, a violent assault on the state that daily demoralises its citizens, an economy in hock and a stubborn unwillingness to reverse failing courses of action such as a jihadist foreign policy.

Not much bad press can do to make things worse. The problem with distracting marketing spin is this: if it actually works to make people genuinely curious about the country, they would like to know more. And guess what they will discover?

Despite all the claims of Islamophobia, bias and international meddling in our affairs, there is nothing that stops Pakistan’s military and civilian establishment from doing what they should be doing for the country’s interests in the first place.

Does anyone, for example, tell us not to hold a census, not to punish murderers or not to ensure zero tolerance for those inciting violence and maintaining private militias, not to improve our policing or our pathetic educational infrastructure, not to redistribute wealth more equitably, not to tax those earning windfall revenues, not to reduce wasteful expenditures or reduce the military’s burden on the economy, not to promote merit over nepotism, not to create spaces for cultural expression and rational debate, or not to take into consideration citizens’ rights to livelihoods and a clean environment or cheaper alternatives while planning grandiose projects?

The problem lies not in our image but in ourselves. Fix that first and the image will take care of itself.

The writer is a filmmaker, media consultant and journalist.