Five die in 4 explosions in Balochistan 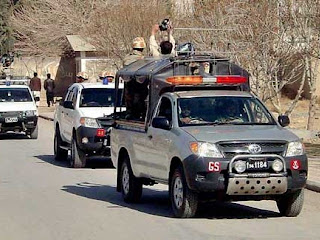 Four explosions in different areas of Balochistan killed five people and injured several others on Thursday.

Early morning, unidentified persons attacked a police check post in the Jafferabad district, as a result of which, two persons, including a police official and an attacker died on the spot, while an attacker and another other police officer were injured.

In another incident, a remote control blast occurred in Turbat Bazar after which militants opened fire in at the people in the market, injuring two people.

The bomb was planted on a motorbike. After the incident, security forces cordoned off the area and started investigations.

In Quetta, a car exploded while passing by a security forces’ vehicle on Saryab road, killing one official and injuring five others.

According to official sources, a remote control bomb was planted on car.

The injured are taken to words civil hospital.

Another blast occurred at the Dingra railway station which damaged the tracks of leading to Sibi and Bakhtiarabad. There were no casualties or damage to trains in the incident.