At least 117 persons were killed and over 206 injured in three separate bomb blasts in Quetta, the provincial capital of Balochistan, on January 10, 2013. At 8.30 pm, a suicide bomber blew himself up inside a snooker club on Alamdar Road, which has two Shia prayer halls. Bomb disposal squad officers said an estimated six to seven kilograms of explosive was used by the suicide bomber. Within a 10-minute gap, as Police, rescuers and media persons rushed to the site, another bomb fixed to a vehicle parked nearby went off. An estimated 100 kilograms of explosives was used in the second blast. The twin blasts killed 105 persons and injured another 169. 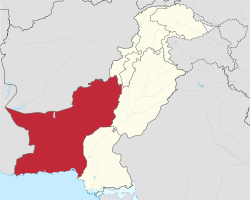 Location of Balochistan in Pakistan
The Lashkar-e-Jhangvi (LeJ) claimed responsibility for the attacks. In calls made to local journalists, LeJ spokesmen Abu Bakar Siddique disclosed that the first blast was carried out by a suicide bomber and the second was a bomb planted in a car that was triggered by remote control.
Earlier in the day, at 3.50 pm, a powerful bomb went off under a Frontier Corps (FC) vehicle near a public plaza and crowded food market at the busy Bacha Khan Chowk, killing 12 persons and injuring over 47. An estimated 25 kilograms of explosives was used in the bomb. As many as 13 vehicles were destroyed in the explosion. The United Baloch Army (UBA) claimed responsibility for the attack.

Reacting to the twin blasts at Alamdar Road, Ali Dayan Hasan, the head of Human Rights Watch (HRW) in Pakistan, observed,
As Shia community members continue to be slaughtered in cold blood, the callousness and indifference of authorities offers a damning indictment of the state, its military and security agencies… 2012 was the bloodiest year for Pakistan’s Shia community in living memory and if this latest attack is any indication, 2013 has started on an even more dismal note.
According to data compiled by the South Asia Terrorism Portal (SATP), in 2012, well over 396 members of the Shia population were killed in 113 targeted attacks across Pakistan, of which 152 were killed in Balochistan alone (in 54 incidents). In 2011, 136 Shias were killed in 24 incidents across the country; 88 of them in Balochistan, in 11 such incidents.

Shia persecution across Pakistan and the state’s callousness has also been acknowledged by the Supreme Court (SC) in its interim order of October 12, 2012, castigating the Provincial Government for its failure to fulfil its duty to protect life and property, and to establish peace in Balochistan in particular. The Court had directed the Federal Government to ensure public security, and underlined the constitutional responsibilities and respective authority of both the Federal and the Provincial Governments. In a harsh critique of the Government, Balochistan Governor Zulfiqar Magsi, referring to the January 10, 2013, attacks, declared, on January 11, that after “such mayhem and carnage, the Government has no right to rule”. On January 13, 2013, the Federal Government announced the imposition of Governor’s rule in Balochistan, effective January 14, 2013. Prime Minister Raja Pervez Ashraf invoked Article 234 of the Constitution to promulgate Governor’s rule in the Province.
With Sindh and Gilgit Baltistan, Balochistan is the only region in Pakistan which has witnessed a rise in terrorism related fatalities in 2012. The Province witnessed 954 fatalities, including 690 civilians, 178 Security Force (SF) personnel and 86 militants in 418 incidents of killing in 2012, as against 711 fatalities, including of 542 civilians, 122 SF personnel and 47 militants in 294 incidents of killing in 2011, according to partial data compiled by SATP. The first 13 days of 2013 have already recorded 144 fatalities [these numbers are likely to be underestimates, as access to media and independent observers is severely restricted in Balochistan]. While overall fatalities recorded an increase of 34.17 per cent, civilian fatalities rose 27.30 per cent; SFs, 45.9 per cent; and militants, 82.97 per cent.

Annual Fatalities in Balochistan: 2006-2013
Source: SATP, *Data till January 13, 2013
Since 2004, 222 civilian killings (123 in the South and 99 in the North) have been claimed by Baloch separatist formations such as the Baloch Republican Army (BRA), Baloch Liberation Army (BLA), Balochistan Liberation Tigers (BLT) and UBA. Islamist extremist formations, primarily the LeJ and the Tehreek-e-Taliban Pakistan (TTP), claimed responsibility for the killing of 186 civilians, all in the North, mostly in sectarian attacks. 1,998 fatalities remain ‘unattributed’ since 2004, 662 in 2012, and 502 in 2011. A large proportion of the ‘unattributed’ fatalities are believed to be the result of enforced disappearances carried out by state agencies, or by their proxies, prominently including the Tehrik-e-Nafaz-e-Aman Balochistan (TNAB, Movement for the Restoration of Peace, Balochistan). Sectarian violence orchestrated by Islamabad-backed Islamist formations is also responsible for a significant proportion of civilian fatalities.

In comparison to 2011, when the Province witnessed 58 major incidents of killing (each involving three or more fatalities), 70 such incidents were recorded in 2012. In one such attack, on December 30, 2012, a car bomb exploded near a convoy of buses taking Shia pilgrims to Iran, on the RCD Highway in the Dringer area of the Mastung District of Balochistan, killing 20 persons and injuring 25 others.

The number of suicide attacks remained comparable between 2011 and 2012, though the resultant fatalities have almost halved – 60 fatalities in four attacks in 2011 as against 30 fatalities in three incidents in 2012. On the contrary, though the Province witnessed fewer bomb blasts, 148 in 2012 as compared to 194 in 2011, the resultant fatalities increased to 205 in 2012 as against 181 in 2011.
In 2012 there were fewer attacks on NATO convoys, though this was principally the consequence of the fact that the route through Chaman (Balochistan) and Khyber Pass [Khyber Agency in Federally Administered Tribal areas (FATA)] was closed for over six months, after the NATO attack on the Salala Check Post in the Mohmand Agency, FATA, on November 26, 2011, which killed 24 Pakistani soldiers. It was only after the United States ‘apologised’ for the attack that Pakistan ordered its customs authorities, on July 4, 2012, to reopen the supply routes to NATO forces stationed in Afghanistan, through the Chaman border. While the Province witnessed 59 attacks on NATO convoys in 2011, with 19 killings and 20 injuries, 2012 recorded just 10 such attacks, resulting in six persons injured. However, in the latest of such attacks, two drivers were killed and 10 NATO containers were damaged when several rockets were fired on a terminal near Hazarganji on the outskirts of Quetta, in the night of January 11, 2013.

Given the state of Governance, acts of violence were, crucially, not restricted to a few areas, but occurred in practically each one of the 26 Districts of the Province, including the capital, Quetta. Quetta bore the brunt of terrorism through year, with 289 terrorism-related incidents, including all the three suicide attacks that took place in Balochistan. Out of the 148 bomb blasts recorded, 49 were reported in Quetta. The provincial capital also accounted for 50 incidents of sectarian violence.
The number of SF personnel killed rose from 59 in 2010, to 122 in 2011, and further to 178 in 2012. In the deadliest of such attacks, on February 1, 2012, at least 15 personnel of the FC were killed and 12 were injured when militants belonging to the BLA attacked four FC check posts near the Margat coalmines in the Mach area of Bolan District. A BLA spokesperson, who introduced himself as Mirak Baloch, stated, “It is a reaction to the January 31, 2011, killings of granddaughter and great-grand-daughter of Nawab Akbar Bugti in Karachi.” The Federal Ministry of Interior, on August 9, 2012, claimed that around 14 militant outfits, including BRA, Balochistan Liberation Front (BLF), BLA and LeJ, were operating in the Province. Interestingly, there was no mention of any Taliban formation or al Qaeda.

As in previous years, rising extremism and violence have repeatedly demonstrated the presence of the Quetta Shura and al Qaeda networks in North Balochistan. Since 2009, at least 22 al Qaeda and two Afghan Taliban militants have been arrested in the region. The then-Director of the Central Intelligence Agency (CIA) General David Petraeus, on February 2, 2012, had emphasised that the US needed to be cautious on Pakistan’s ability and willingness to “go after” the Haqqani Network and those Taliban leaders present in Balochistan, known as the Quetta Shura. The Pakistan establishment, however, continues to brazenly deny this reality.

Meanwhile, the much publicised Aghaz-e-Haqooq-e-Balochistan (Initiation of the rights of Balochistan) package – which was approved by Pakistan’s Parliament on November 23, 2009, acknowledging the widespread deprivation and neglect that prevailed in the Province and set a three-year implementation deadline – has expectedly failed to deliver. Though Parliamentary Secretary Khurram Jahangir Watto, on October 5, 2012, claimed that 42 of its 61 points had already been implemented, there has, in fact, been little progress on the issue of provincial autonomy, which according to the package, should have been immediately addressed. Though a parliamentary committee to look into the proposals and recommendations regarding provincial autonomy has been formed, the committee is yet to reach to any conclusion. Similarly, the proposal regarding initiation of a political dialogue with all major stakeholders in the political spectrum, to bring them into the mainstream politics, has not been met, as Government failed to inspire trust in the Baloch nationalist groups. The Government is yet to release political prisoners, another proposal in the package. While a range of financial elements in the package have been announced, implementation on the ground remains, at best, marginal.

Anger among Baloch nationals continues to mount, both as a result of the continuing neglect of the province and the relentless campaign of ‘disappearances’ inflicted on dissidents by the state’s Forces and covert agencies. Through the year, the rebels continued to carry out attacks overwhelmingly targeting the economic infrastructure in the province, mainly gas pipelines, power pylons and railway tracks. The attacks remained principally non-lethal in intent. There were no deaths in 24 such incidents recorded through 2012. According to partial data compiled by SATP, there have been at least 194 incidents of sabotaging of gas pipelines since 2004.

The SF’s remain preoccupied with their “kill and dump” operations, while Islamabad continues to ignore the ground reality in the Province. The crisis continues to deepen, with Islamabad sustaining groups of Islamist and sectarian extremists, even as it seeks to crush the groups agitating to draw attention to the legitimate demands and genuine grievances of the people of Balochistan.


About the author: SATP

SATP, or the South Asia Terrorism Portal (SATP) publishes the South Asia Intelligence Review, and is a product of The Institute for Conflict Management, a non-Profit Society set up in 1997 in New Delhi, and which is committed to the continuous evaluation and resolution of problems of internal security in South Asia. The Institute was set up on the initiative of, and is presently headed by, its President, Mr. K.P.S. Gill, IPS (Retd).