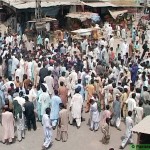 QUETTA: Supporters of the Pakistan People’s Party (PPP) reacted angrily against yesterday’s assassination attempt on the life of Balochistan Chief Minister Nawab Mohammad Aslam Raisani as an attack on his convoy on Zarghoon Road left at least nine people injured.
In Mastung, which is the electoral constituency of Nawab Raisani, the supporters blocked the Quetta-Karachi highway for several houses to condemn the incident. A

shutter down strike was called in Mastung district against the assault. Armed supporters of the Raisani tribe forcefully shut down the markets in Sibi while shops were also closed in Mach, Mattadi and Kholpur areas. They burnt tiers on the roads and blocked the national highway for all forms of traffic.

Maula Baksh Raisani, a former Mach Naib Tehsil Nazim and Mir Liquat Raisani, the Bolan president of Raisani Youth Force, led a protest rally in Bolan district where a call for a shutter down was also given.