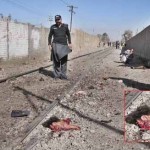 In a period of barely ten days, both the governor and chief minister of Balochistan have narrowly escaped two separate assassination attempts. Last week, the Baloch Liberation Army (BLA) accepted responsibility for attacking the convoy of Governor Nawab Zulfiqar Ali Magsi. The governor was returning from Kalat to Quetta when his convoy came under a remote-control IED attack.


The remote control blast did not kill the twice-elected chief minister but caused enormous panic in the official ranks. The governor sarcastically commented that his name had been registered among the martyrs after he survived the attack. His tribesmen, on the other hand, took the event more seriously and resorted to protests against the assassination plot. The BLA said that the attack on the governor was intended to avenge recent killings of Baloch political workers.

Another assassination attempt was made yesterday on Quetta’s Zarghoon Road on the life of Chief Minister Nawab Mohammad Aslam Raisani. The CM came under attack when his convoy was attacked.Raisani had recently disclosed in an interview with BBC’s Ahmed Raza that his son and he were on the ‘hit-list’ of probably Baloch armed groups. While the police termed yesterday’s attack as a case of suicide bombing, the Baloch Liberation United Front (BLUF) which accepted responsibility for the attack, said it was a remote control bomb blast.

Initially, there were reports that the Lashkar-e-Jhangavi, a Sunni militant group with a very significant presence in Quetta, had claimed responsibility for the attack by calling it a suicide attack. As dust settled down, a BLUF spokesman strongly contradicted LeJ’s claim and said that the attack was carried out by its activists and asked other organizations to refrain from taking credit for the operations conducted by BLUF. Daily Tawar quoted through news agencies the ‘real spokesman’ of LeJ who disowned his organization’s involvement in the entire episode. The LeJ spokesman urged media outlets to report carefully, warning “otherwise, we will teach them (the journalists) a very bad lesson.”

That said, the lone dead person was either probably a passerby or a security guard whose identity the government does not want to reveal in order to avoid demoralizing the security guards of the VVIP squads.

Besides holding constitutional offices, both Magsi and Raisani are highly influential chiefs of their respective Baloch tribes. Raisani told the media, soon after the attack on his convey, that he fully knew who the attackers on his convey were but he still supported a peaceful and political solution to the Balochistan crisis. He once again offered a hand of reconciliation with Baloch armed groups and made it clear that he would not negotiate to LeJ because he had never extended any kind of offer to that group in the past.

On his part, Governor Magsi reacted more angrily to the attack on Raisani by saying that both of them were capable of retaliating with tribal force.

The situation in Balochistan has rapidly worsened over the years. It never improved since General Musharraf inducted controversial mega projects, unleashed a military operation, which he would subsequently bill as “500% justified” and killed popular Baloch nationalist leader Nawab Akbar Bugti. Ever since, the situation in the province has dramatically deteriorated as more Baloch activists have been whisked away and killed allegedly by the government agencies.

The attacks on two highly influential consitutional officers and tribal lords clearly shows the alarmingly dangerous level of insecurity that prevails in the province. A few months ago, the provincial education minister Shafiq Ahmed Khan was killed which was followed by a bomb blast at the residence of another finance minister Mir Asim Kurd.

If big guns like Magsi and Raisani are absolutely unsafe, what should the common man in the street expect? The more these officers restrict their movements, the more they remain disconnected from the masses. People expect their elected representatives to meet and pay attention to their problems in order to solve them. These attacks will hopefully lead to enhanced security of governor, chief minister and the provincial ministers. In that case, the provincial government is likely to further go underground and become inaccessible for the masses due to security reasons.

A sense of fear has already overtaken all members of the Balochistan as only four MPAs out of 65 showed up for a recent meeting session. The MPAs are making every effort to avoid coming in public. However, in its meeting soon after the assault on the official convoy, the Balochistan Assembly strongly condemned the attacks. They said these events were about to trigger a tribal war in the province.

A four member team of the Federal Investigation Agency (FIA) instantly visited Quetta on the instructions of Interior Minister Rehman Malik to probe the attack on the Chief Minister.

These attacks indicate that space in Balochistan is being narrowed for the friends of Islamabad or parliamentary politics. The way forward is going to be more difficult for Islamabad because the armed groups have not only repeatedly rejected offers to talk but they have also gained too much power by now which has enabled them to disrupt any tight security to hunt down top government officers.