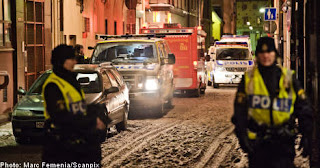 Two nearly simultaneous explosions rocked central Stockholm on Saturday evening, killing one person and injuring two others. Police believe the man who died may have blown himself up.

Roughly ten minutes before the explosions, Swedish news agency TT received an email telling Muslims in Sweden and Europe it was "time to take action".

Officers said they did not know the precise cause of the blasts or if they were linked. One occurred in a car about 200 metres from the other.

A second alert was received two minutes later and one person was found dead at the scene of the second blast which took place in the street, he added.

"I cannot confirm that the death is linked to the explosion of the car but I cannot deny it either," police spokeswoman Petra Sjolandero told AFP.

She added that the car caught fire "following a series of explosions which could have been from gas canisters."

According to the TT news agency, police are operating under the assumption that the man who died wasn’t injured in a car explosion but instead blew himself up.

The first emergency calls came in at 4.52pm on Saturday, with police fielding dozens of calls about a car exploding at the intersection of Drottninggatan and Olof Palmes gata in central Stockholm.

Later, a man was found dead at the intersection of Bryggargatan and Drottninggatan.

A man who arrived on the scene before the police arrived told the Dagens Nyheter (DN) newspaper that the dead man had a large wound in his abdomen.

“It looked like the man was carrying something that exploded on his stomach. He didn’t have any injuries to his face or his body and the stores nearby weren’t damaged. All the windows were whole,” the witness told DN.

According to the Stockholm police, a bag was found nearby the man who died in the second explosion. However, police refused to divulge details of what the bag may have contained.

Approximately ten minutes before the explosions occurred, Swedish news agency TT received an email, also addressed to Säpo, in which a reached out to “Sweden and the Swedish people”.

He cites Sweden’s silence surrounding the cartoons by Swedish Lars Vilks which portray the prophet Mohammed as a dog, the Swedish troops in Afghanistan, saying in audio files attached to the email that “now your children, daughters and sisters die like our brothers’ and sisters’ children die”.

“Our actions will speak for themselves. As long as you don’t stop your war against Islam and degrading the prophet and your stupid support of that pig Vilks,” the man said.

The man also urges all Muslims in Sweden to “stop sucking up to and degrading”. He concludes the message with yet another call to “all the mujahedeen in Europe and Sweden”.

Säpo hasn’t commented to TT on the contents of the message or confirmed that it also received the email, which included audio files in both Swedish and Arabic.

There is also no confirmation that the message has anything to do with the explosions.
TT/AFP/The Local (news@thelocal.se)