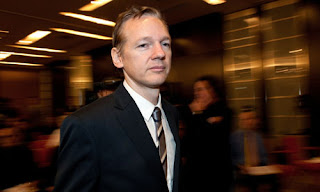 Russia has suggested that Julian Assange should be awarded the Nobel peace prize, in an unexpected show of support from Moscow for the jailed WikiLeaks founder.
In what appears to be a calculated dig at the US, the Kremlin urged non-governmental organisations to think seriously about "nominating Assange as a Nobel Prize laureate".
"Public and non-governmental organisations should think of how to help him," the source from inside president Dmitry Medvedev's office told Russian news agencies. Speaking in Brussels, where Medvedev was attending a Russia-EU summit yesterday , the source went on: "Maybe, nominate him as a Nobel Prize laureate."
Russia's reflexively suspicious leadership appears to have come round to WikiLeaks, having decided that the ongoing torrent of disclosures are ultimately far more damaging and disastrous to America's long-term geopolitical interests than they are to Russia's.
The Kremlin's initial reaction to stories dubbing Russia a corrupt "mafia state" and kleptocracy was, predictably, negative. Last week Medvedev's spokesman dubbed the revelations "not worthy of comment" while Putin raged that a US diplomatic cable comparing him to Batman and Medvedev to Robin was "arrogant" and "unethical". State TV ignored the claims.
Subsequent disclosures, however, that Nato had secretly prepared a plan in case Russia invaded its Baltic neighbours have left the Kremlin smarting. Today Russia's foreign minister Sergei Lavrov said Nato had to explain why it privately considered Russia an enemy while publicly describing it warmly as a "strategic partner" and ally.
Nato should make clear its position on WikiLeaks cables published by the Guardian alleging that the alliance had devised plans to defend Poland, Latvia, Lithuania and Estonia against Russia, Lavrov said.
"With one hand, Nato seeks agreement with us on joint partnership, and with the other, it makes a decision that it needs to defend. So when is Nato more sincere?" Lavrov asked today. "We have asked these questions and are expecting answers to them. We think we are entitled to that."
Lavrov said his attitude towards the leaked US state department cables was "philosophical". "It is interesting to read, including what ambassadors write to provide a stream of information to their capitals," he admitted.
Dmitry Rogozin, Russia's hardline ultra-nationalist ambassador to Nato, also today voiced his support for the embattled Assange. He tweeted that Assange's arrest and incarceration on Monday at the City of Westminster magistrates' court demonstrated that there was "no media freedom" in the west. Assange's "fate" amounted to "political persecution" and a lack of human rights, the ambassador said.
In London, meanwhile, Russia's chargé d'affaires and acting ambassador in the UK, Alexander Sternik, said relations with Britain had improved since the coalition came to power. He complained, however, about the hostile reaction in the British media after Fifa's executive committee voted that Russia – and not England – should host the 2018 World Cup.
In a briefing to journalists this morning, Sternik said: "While the English bid was technically a strong one, the Russian bid was in line with the well-known Fifa philosophy of opening new frontiers for world football. The vote result was therefore quite logical, and while the disappointment of many in England is understandable, the media outrage was a step too far. It's not cricket, as the English say."
http://www.guardian.co.uk/media/2010/dec/09/julian-assange-nobel-peace-prize
Posted by Mohim Baloch at Friday, December 10, 2010