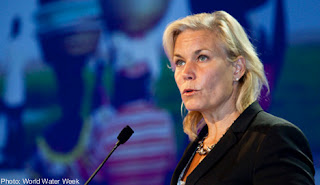 World Water Week opened in Stockholm on Monday with calls for greater, more resilient water management in cities to ensure better food and water security in a rapidly urbanising world.
"More than ever we need new technologies and policy solutions" to compensate for water shortages hitting a growing number of the world's inhabitants," Swedish minister for International Development Cooperation, Gunilla Carlsson, said in her opening address.

"The proportion of poor people is increasing more in urban than in rural areas," she said, stressing that poor, urban areas "are home to 830 million, who often lack fundamental services in water and sanitation, making it even more difficult to break the vicious circle of poverty".

Poor water quality accompanied by poor sanitation is the second leading cause to child mortality in the world, and also contributes to mother mortality, Carlsson said.

"Increased access to clean water supplies and sanitation is an important catalytic force for development," she said, insisting "the costs of not acting far exceed the costs of well-functioning, sustainable water resource management."

Around 2,500 experts from some 130 countries are attending the 21st edition of the World Water Week in Stockholm, and will at the end of this week publish a declaration aimed at contributing ideas and support to the United Nation's conference on sustainable development set to be held in Rio de Janeiro in June 2012.

In July last year, the UN's general assembly adopted a resolution recognising access to clean water and sanitation as a human right.

Nonetheless, more than a year later, 1.6 billion people still live in areas affected by drought, the UN Environment Programme said in a report published Monday along with the International Water Management Institute, cautioning that the number could easily rise to two billion if not enough is done to change the situation.

"Concerns linked to water in urban areas have grown, and not only in developing countries," Henri Begorre, the president of the French Water Partnership, an umbrella organisation comprising all the French groups working for international water intervention, told AFP.

"Investments [in infrastructure] have not kept up in pace with urbanisation," he told AFP.

The annual conference in Sweden will this year help pave the way for a conference on water, energy and food in Bonn, Germany, in November, and for the Water Forum in Marseille, France, next March.
AFP/The Local (news@thelocal.se)
What do you think? Leave your comment below.
http://www.thelocal.se/35696/20110822/
Posted by Mohim Baloch at Monday, August 22, 2011