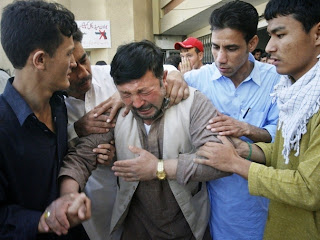 Shia_Hazara minority has repeatedly been attacked in Quetta by Lashkar-e-Jhangvi, a Sunni militant group with links to Punjabi Taliban. (Photo: FILE)
QUETTA: A powerful bomb went off outside an Eidgah in Quetta on Wednesday where Shia-Hazaras had gathered for Eid prayers, killing at least 10 people — including three women — and wounding 11 others.

The blast on Hazara Eidgah on Gulistan Road also caused damages to several vehicles and nearby buildings.

Security forces cordoned off the area and started investigation and rescue teams shifted the dead and the wounded to nearby hospitals. Some of the injured are reportedly in critical condition.

According to reports on some news channels, Quetta Azadari Council has announced weeklong mourning against the blast. Hazara Democratic Party (HDP) has also condemned the terrorist attack while several other Shia parties have alsocalled for a 10-day mourning.

Hazara community in Quetta, predominantly Shia-Muslim, have repeatedly come under attack in the volatile province of Balochistan. Lashkar-e-Jhangvi, a militant Sunni extremist group with links to Punjabi Taliban, has often claimed responsibility for attacks on Hazaras in the town. However, there was no no immediate claim of responsibility for this bomb blast.