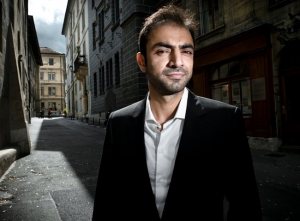 GENEVA (INP) - The grandson of Nawab Akbar Bugti, Brahumdagh Bugti, has insisted that he is a political leader only and playing no role in the armed uprising against the government in Balochistan.

In an interview published in the New York Times on Wednesday, Brahumdagh, who fled Pakistan to Afghanistan and then to Switzerland, said he supported only peaceful political activism rather than armed resistance. He, however, said he did share the rebels demand for independence for the Baloch. “I support the political struggle and the idea for liberation because the Baloch people demand it,” he said.

He has been on the run since 2006, when he narrowly escaped a Pakistani Army operation that killed his grandfather and dozens of his tribesmen in the southwestern province of Balochistan.

Bugti insisted he was caught up in a deadly struggle between his grandfather, Nawab Akbar Khan Bugti, a former governor and a leader of the Bugti tribe, and Pakistan’s military leader at the time, Gen Pervez Musharraf, over control of Balochistan’s rich natural resources and the establishment of military bases in the province. Though Bugti says he supports only peaceful political activism rather than armed resistance, he does share the rebels’ demand for independence for the Baloch. He formed a political party shortly after his grandfather’s death, distancing himself from the established parties.

Bugti said eight members of his political party in Balochistan had been killed, five members of its central committee were missing since its formation in 2007 and the top leaders had been forced into exile. Even the party’s 76-year-old secretary general, Bashir Azeem, was detained for two months in 2009 and tortured - including being beaten and hung upside down, in a case documented by Human Rights Watch, he said. When the Pakistani Army shelled their ancestral home in Dera Bugti in December 2005, Bugti took to the hills with his grandfather, who was 80 and partly disabled, and they camped for months in mountain caves. Then, in August 2006, the military traced them. “I escaped, but he could not,” Bugti said.

From a hide-out two miles away, he watched the military assault, a furious three-day bombardment by attack jets, helicopter gunships and airborne troops. On the evening of the third day, the government triumphantly announced that Nawab Bugti had been killed. Some 32 tribesmen died with him, Bugti said. The day after learning of his grandfather’s death, Bugti gathered his closest tribal leaders, and they urged him to leave and save himself, he said. Pakistan and neighboring Iran were hostile to the Baloch, and the only place to go was Afghanistan, though it was consumed by the war with the Taliban. It took 19 days, on foot, to trek from a mountain base near Sibi to the Afghan border. But he had an armed tribal force and scouts with him and made the escape without incident, crossing into Afghanistan along a mountain trail, he said.

Although he had few contacts there, tribal links and traditions of hospitality assured him a welcome. He sent for his wife, his two children - a third was born in Afghanistan - and his mother, and after an elaborate dance to confuse government watchers, they crossed the border to join him days later.
Yet Afghanistan was not a safe haven. The family moved about 18 times over the next 18 months, and despite never going outside, he said, they became the target of repeated suicide bomb attacks by the Taliban and Qaeda militants, who they believed were sent by Pakistan. At least one bomb attack, in the upscale residential Kabul neighborhood of Wazir Akbar Khan, was specifically aimed at Bugti, a Western diplomat and an Afghan intelligence official said. Bugti has called on the United States to end aid to the Pakistani Army, which, he said, was diverting resources from intended counterterrorism goals and using them to suppress the Baloch. “If the US stopped the military and financial assistance, they could not continue their operations for long,” he said.

The increased violence has pushed the Baloch far beyond their original demands for greater autonomy and recognition of their rights and toward an armed independence movement. “Some 99 per cent of the Baloch now want liberation,” Bugti said.

“The people are more angry and they will go to the side of those using violence, because if you close all the peaceful ways of struggle, and you kidnap the peaceful, political activists, and torture them to death and throw their bodies on roadsides, then definitely they will go and join the armed resistance groups,” he said.

He sees little hope of change from within Pakistan and seeks intervention by the United Nations and Western nations. “We have to struggle hard, may be for one year, two years, 20 years,” he said. “We should be hopeful.”