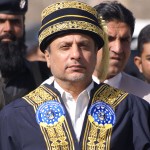 The Baloch Hal News
QUETTA: Balochistan’s Governor Nawaz Zulfiqar Magsi has said time is running out in Balochistan and more and more Baloch youngsters are joining the rebellion. The people are continuously exercising their right to question the authorities’ actions in the province.
“I have told the army chief publicly to provide answers to the killing of the disappered people in my province. People have the right to know the facts behind the current state of affairs,” he said while talking to a former senator and a newspaper editor Syed Fasehi Iqbal.
Magsi, also a former Balochistan chief minister, said if the State failed to expose the perpetarots of injsustice and violence, it was very likely that people would hold the State itself responsible for whatever is happening.
“Nawab Akbar Bugti was a truly respected Baloch tribal and political leader who could resolve the problems of Balochistan,” he referred to the seventy-nine yearold Baloch leader who was killed in a military operation in 2006.
http://www.thebalochhal.com/2011/08/army-must-reveal-facts-about-disappearances-killings-in-balochistan-governor-magsi/
Posted by Mohim Baloch at Saturday, August 27, 2011