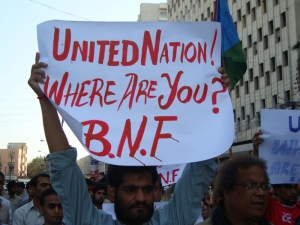 Occupied Balochistan/Karachi: A shutter down and wheel jam protest was observed for second consecutive day against the murder of two Baloch political activists, by Pakistan military, in most cities and town of Balochistan.

The BSO-Azad and BNF had given the call for protest to which the people responded positively by keeping their transports off the roads and businesses shut. Most of the government office, schools and Banks also remained close for the second day in most parts of Balochistan.

Government Teacher Association also boycotted classes and protested against the murder of Master (Teacher) Arif Rehman Baloch and Mr. Wadhela. The GTA had announced seven days mourning and three days protest against the murder of their colleague Arif Baloch. All the schools and educational institutes will remain closed for the third day (Today).

Karachi protest: hundreds of gather in front of Karachi Press Club on the call of BNF to protest against the in-custody killing of Arif Rehman Baloch and Mehboob Wadhela Baloch by Pakistan (security forces). The demonstrators were holding placards inscribed against state atrocities against Baluch people and demands to the UN to intervene in Balochistan. The participants of the protest also chanted full throat slogans against Pakistan and in favour of Baloch freedom movement.

Speaking at the occasion the BNF leaders said that recent wave of killings of Baloch political activists was the continuation of the state’s policy of genocide of the Baloch people. They, however, reiterated such brutal acts of the state [Pakistan] will not stop the growing popularity of Baloch struggle for National liberation. The (BNF) demanded of the International Community to take notice of Baloch genocide at the hands of Pakistan.