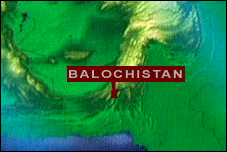 Occupied Balochistan, Quetta/Awaran/Kohlu: According to Baluchistan’s National newspapers Pakistani security forces are under continuous attacks in different part of Baluchistan. As recently as yesterday three Pakistani securities personal including a sub-inspector have been killed in three different incidents in Quetta, Kohlu and Awaran.

In the first incident, a sub-inspector of Balochistan Constabulary (BC) was gunned down in the Balochistan’s capital on Monday. The sub-inspector Nabi Bakhsh was on his way near Kili Shah Muhammad, in the outskirts of Quetta when unidentified armed men opened indiscriminate firing on him and killing him on the spot.

The second incident happened in district Awaran’s Mashkay region where unknown person shot dead a police officials at Mashky Cross. The body of the killed officials has been handed to his family after completing official formalities.

Meanwhile, Azad Baloch, claiming to be a spokesman of defunct Baloch Liberation Army, accepted the killing of sub-inspector and the attack on security forces water tanker in Kohlu. He further said that sub-inspector Nabi Bakhsh Marri was spying for government agencies and was creating hurdles in the way of Baloch resistance movement, therefore, he was targeted.