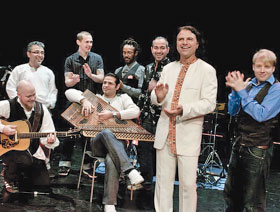 Musical harmony: Golbang is in many ways a reflection of the eight virtuoso participants of the group and every song can be performed in at least eight different ways.

MUSCAT: The unique meeting between the Orient and the Scandinavian is nothing less than magic. And for the first time, the Baluch-Iranian-Swedish music group Golbang is bringing this magic for Muscateers this month.

Led by Rostam Mir Lashari, the famous Baluch-origin singer, the band will perform at Qurm City Amphitheatre in Muscat on October 20. Incubix is organising the mega musical extravaganza.
“We take immense pride in introducing Golbang, the pride of
Baluchi music. An event of this magnitude is obviously a financially demanding venture.

“However, our aim is to promote greater community awareness and appreciation of the Baluchi culture and in doing so, reflect and contribute to the creativity and cultural diversity of music in Muscat,” the organisers told Times of Oman.

Golbang belongs to the small elite group of high-class bands that elevate the world music genre.

“When the distinct sounds of the various cultures shine through, as they do in Golbang’s music, it’s nothing less than magic. An important part of Golbang’s music is improvised, which very much contributes to their unique sound. Another equally important part is the variety of rhythms that can, and should, evolve into completely new forms, as the characteristics depend on who is the interpreter at every given moment,” the organisers added.

Golbang is in many ways a reflection of the eight virtuoso participants of the group and every song can be performed in at least eight different ways.

Other than the lead singer Rostam, Adam Johansson, Jouni Haapala, Daniel Reid, Emad Shakoris, Ramin Yousefi and Saeed Hashabeiki are the other artists in the band.

Golbang, the song of the nightingale in Persian, was founded 15 years ago by lead singer Rostam, originally from southeastern Iran.

Over the years, the group’s musicians came together — often at the Royal College of Music in Stockholm, where many of them studied–and experimented with combining Scandinavian and Middle Eastern folk melodies, and synthesising it with African rhythms. There, the unique sound of Golbang, now one of Scandinavia’s most popular world music bands, was created.

The band has performed at major music venues in Scandinavia and other western countries. They have also produced four well-acclaimed music albums, including the most recent collection, Setareh, which translates into ‘Star’ in Persian.