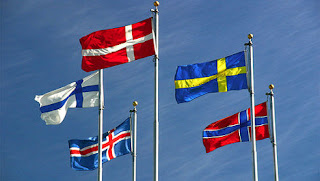 As the eurozone crisis continues to dominate European political business, Gunnar Wetterberg, an analyst at white collar union Saco, has stated the case for a Nordic Union and currency, to counter the threat of a eurocollapse.
Wetterberg argued in an opinion article in the Dagens Nyheter (DN) daily on Tuesday that a federal Nordic state would enable Scandinavian countries to be more resilient in the face of global financial storms.

"A united Nordic state would be far stronger in the face of the outside world than the five countries individually, while an increasingly common domestic market would provide significantly better growth than today," Wetterberg argued.

He continued to call on leaders to "enhance emergency preparedness by exploring the conditions for joining together", bemoaning that the possibility is barely considered to exist.

Wetterberg, who is a prominent social commentator and historian, first raised the prospect of a union two years ago when he presented a proposal for a new Kalmar Union, referring to the historical term meaning a series of unions between the kingdoms of Denmark, Norway and Sweden from 1397 to 1523.

While he noted that his call courted comment and praise, he underlined that little has been done in the interim to seriously consider the alternative, despite the ongoing debt crisis afflicting several EU countries and threatening the very existence of the euro.

Wetterberg warned that if the EU moves towards a more federal solution in order to tackle the problems with the single currency, then Scandinavia needs to stand ready.

"Otherwise it will be difficult to maintain openness and free trade with other countries' weakness for protectionism and secrecy," he argued.

A comparison was made with the US, where while maintaining a federal system with significant differences between the states, it is possible for workers to move across the country to account for fluctuations in the economy.
The Local/pvs (news@thelocal.se)
What do you think? Leave your comment below.
http://www.thelocal.se/36958/20111025/
Posted by Mohim Baloch at Tuesday, October 25, 2011