QUETTA, Pakistan — Assistant Commissioner Afzal Sarpara of the Khuzdar district of Balochistan said that they had found up to 15 unmarked graves in the worst violent-ridden districts of Balochistan and urged national and international agencies to help them identify the dead.
Nasrullah Baloch, vice chairman of the Voice for Baloch Missing Persons (VBMP), fears that their relatives who disappeared following arrests by security services in the restive province might be buried in those graves. He appealed to the Pakistani judiciary and international human rights organizations like Amnesty International, Human Rights Watch and the United Nations to pressure Islamabad for a thorough and transparent investigation.
According to officials, one mass grave containing nearly 15 unidentified bodies was discovered by locals in the Tootak area of the Khuzdar District in southwestern Balochistan. “An investigation team headed by Waheed Shah, Khuzdar deputy commissioner, visited the area and gathered information about the human remains,” said Afzal Sarpara, adding that “The bodies were one month old and beyond recognition.”
Regarding the bodies, Sarpara says he doesn’t know who these people are and who killed them
Sarpara said investigations were being carried out with the help of local police. A security official who spoke on condition of anonymity said so far they have found around 56 unidentified graves and there are many more, but these bodies have been claimed as those of Baloch missing persons. The confirmation by government officials that over one dozen bullet-riddled bodies have been dumped in unmarked graves — many of them mass graves — in Balochistan has exposed the gross human rights abuses perpetrated by the security forces over the years in a bid to suppress a popular uprising against the country.
The discovery of mass graves in southwestern Balochistan spread rapidly and triggered resentment among social media activists. Many activists use Twitter to get the message out.
Tarek Fatah, a prolific writer and renowned social media activist, urged international human rights organizations to investigate this human tragedy. 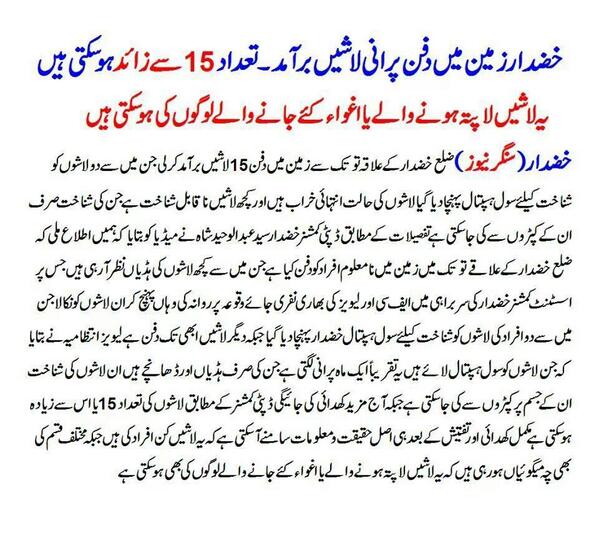