•Balochistan: US Congressman Rohrabacher Calls For Pakistani Officials To Be Tried For ‘War Crimes’ 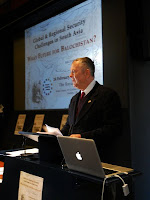 At a recent UNPO conference on security in South Asia, US Congressman D. Rohrabacher fiercly supported the Baloch cause for self-determination and criticized Pakistan for its handling of the Baloch national struggle, affirming that Pakistani officials are responsible for war crimes in the region and should be brought to justice.

Below is an article published by International The News:
Republican Dana Rohrabacher, chairman of the subcommittee for Europe and Eurasia of the House of Representatives, said this at a conference entitled “Global and Regional Security Challenges in South Asia: What Future for Balochistan?” organized by the Unrepresented Nations and Peoples Organization (UNPO) at the Royal Society here [London].

Democrat Congressman Brian Higgins didn’t speak but he supported his fellow Congressman’s views and objectives of the conference. The senators were returning after leading a delegation to Uzbekistan and stopped in London especially for this conference which is likely to irritate Pakistan, as Dana Rohrabacher has repeatedly issued controversial statements about Pakistan.

He used the conference, chaired by young Baloch leader Noordin Mengal, to state that Pakistan is not an ally of the US and of those who believe in peace and alleged that the country has worked against the interests of the US.

Speakers in different sessions addressed issues such as the inability of the state to protect its citizen and the way it has at times addressed tensions and rights situations particularly in Balochistan. They addressed the issue of Talibanization of Balochistan, the rise of Islamic radicalism in South Asia, security in the Iranian Balochistan, the key role energy and mining resources play in Balochistan, and the influence of Iran, Pakistan, India and China in the region.

The Khan of Kalat Mir Suleman Daud called for a “united Baloch front in the struggle against the horrors imposed on the Baloch people by Islamabad” and hoped that Baloch people will soon realize that unity was the only way forward.

Noordin Mengal stated that that a sovereign state of Balochistan would not only benefit the Baloch people, but also the entire region. Mehran Baloch, Balochistan’s representative at the United Nations, said UNPO was doing a tremendous service to Baloch people by bringing together various key voices on the Balochistan crisis.

He said the conference had been clear in calling for what action the international community should take to help the oppressed people of Balochistan. In reference to the recent handing over of Gwadar Port to China, he said outside interference in Balochistan was at its peak and it was meant at colonizing Balochistan’s natural resources.

The conference declaration stated that restoration of the rights of Baloch people was fundamental including their culture, values, languages, religions, economy, political and legal institutions, traditional knowledge system, way of life, land and resources; that the Baloch people have the right to restore their own state and determine its relations to other political communities, including States and international organizations.
The declaration urged the Government of Pakistan to refrain from “the use of oppressive measures leading to human rights violations against the Baloch” and demanded that the perpetrators of human rights violations should be brought to justice.

Speaking to The News, Melissa Apaza, a UNPO spokesperson said the UNPO believes that the current security situation in Pakistan requires the participation of all stakeholders in order to bring peace to the region of not only Balochistan but also to South Asia as a whole.

She added: “One of our most active members is Balochistan, a region that is facing tremendous difficulties in particular regarding security issues. In fact, the democratic rights of Baloch people to assemble and to protest, as well as the increasing number of involuntary disappearances in the region are components of the Baloch struggle against the daily oppression they face.”