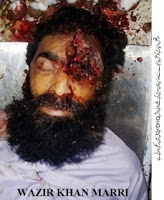 According to the Balochistan Levies, some passers-by informed them after spotting the body in Sub-Tehsil Liari. Levies personnel led by Naib Tehsildar Ilhai Bakhsh Zehri rushed to the spot and shifted the body to District Headquarters Hospital Uthal.

The body was identified as that of 35-year-old Wazir Khan Marri, a resident of Goth Lal Muhammad Marri, Karachi. Hospital sources said that the body had bullet wounds to the head and chest. A case has been registered against unidentified persons and an investigation is under way.


Separately, police found a mutilated body dumped in a gunny bag in Chetkhan area of Panjgur District. The body was found dumped in a well by labourers, who informed the police. It was shifted to a nearby hospital for autopsy. However, hospital sources said that it could not be identified as it was badly mutilated. (Courtesy: Dailytime Pakistan)

Additional information by BW: Wazir Khan Marri was an employee of Steel Mill in Karachi. He was abducted from his work place on 31 December 2011 and has been reported as abducted. His family members believe that he was abducted and killed by Pakistani security agencies.