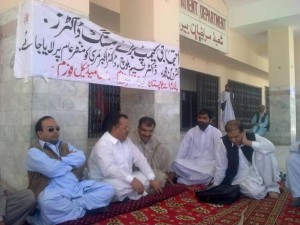 In less than two months, at least three prominent Baloch doctors have been target killed, including two in the provincial capital. As expected, the murderers in all three cases are at large. Thursday’s killing of police surgeon Dr. Baqir Shah in Quetta, however, is a classic example of official negligence. Besides Dr. Shah himself and his family, everyone else knew his life was at risk. Having experienced torture in June this year in the hands of at least ten people attired in police uniform, the late physician had told the media as well as the judiciary that his life was under constant threat. Therefore, it was the responsibility of the government of Balochistan to provide security to a high-profile figure like Dr. Shah.

The late police surgeon was somewhat an easy target for terrorists for a host of reasons. His situation could enable any murderer to immediately vanish in thin air because of the circumstances that shrouded the late doctor. He gained enormous national and international media attention after conducting the postmortem of five foreigners who were killed on May 17 in what is now remembered as the infamous and tragic Kharotabad incident.

Dr. Shah impressed everyone with his absolute honesty and professionalism when he contested the unconvincing official description of what had actually happened in Kharotabad. He contradicted the version of the events as narrated by the Frontier Corps (FC) and the police.

Police in Quetta say it is premature to say whether or not Dr. Shah’s murder was a case of targeted killing. Such assertions are simply meant either to delay investigations or exempt the government from its accountability. What have the law enforcement agencies been doing in the past two months regarding the murder cases of two other Baloch doctors? It is not a coincident that all doctors being killed in Balochistan are Balochs. While we do recognize the government’s limitations given its poor and slow investigation apparatus but does it mean that the law enforcement authorities have utterly failed to make an inch of progress in chasing elements who killed Dr. Mazhar Baloch, the provincial president of Pakistan Medical Association (PMA) on October 15? Whether these killers linked to each other and share a common hit-list of Baloch doctors and professionals remains unknown but still guessable.

In another similar case two weeks ago, on December 16th to be precise, Dr. Naseem Baloch, the chief medical officer of Gwadar’s District Headquarters Hospital, was shot dead by unidentified persons.

These killings have triggered a wave of insecurity among Baloch doctors and also tremendously infuriated the already enraged Baloch population. Besides the common Baloch in the streets even professional doctors and seasoned politicians are holding the government and its certain shadowy wings responsible for this wave of fatal violence. Even some Baloch members of the the provincial cabinet have criticized their own government.

During a session of the Balochistan Assembly on December 17th, one could see the level of legislators’ powerlessness that they walked out the assembly session against the killing of Dr. Naseem Baloch.

“The provincial government allocates Rs11 billion for the maintenance of law and order, but still police and other law enforcing agencies have failed to give an output or a positive result,” said Asadullah Baloch, minister for agriculture who is also the secretary general of the Balochistan National Party (BNP-Awami), “The senior police officers must be held accountable for their failure to protect the life and property of the people”

The Pakistan Medical Association and Baloch Doctors’ Forum (BDF) have jointly announced three days of mourning and a strike in Quetta’s Bolan Medical College Complex and the Civil Hospital. Yet, the strike is likely to have a deeper impact in the Bloch-dominated districts where it may prolong for more than three days. The BDF has also highlighted the cases of two disappeared Baloch doctors, Dr. Din Mohammad Marri and Dr. Akbar Marri whose families hold the state intelligence agencies responsible for their disappearance.

Doctors in any society deserve profound respect for their commitment to serving the humanity. In a backward area like Balochistan, where the health indicators are extremely murky, very few young men and women manage to accomplish their medical education. They strive tirelessly for at least seven years to get a degree in medicine. The first thing most of the non-local medical students who study on reserved seats at the province’s lone medical college, Bolan, quit Balochistan as soon as they complete their eduction. Only some professionally committed doctors, who surely receive a number of better offers and opportunities to go to Europe and USA for a better personal and professional life, turn down these attractions and agree to serve in the conflict-stricken province of Balochistan.

Hence, it is total senselessness to subject doctors to enforced disappearance for several months and deny him the primary human right of free trial. International human rights groups and Doctors Without Borders should quickly take up the issue with the provincial and federal authorities to ensure the recovery of the missing Baloch doctors.

Doctors like Mr. Shah are role models for our society because they selflessly cure the ailing humanity and also firmly and professionally stand against all pressures intended to urge them to compromise on their professional integrity.

Chief Minister Raisani’s intervention and approval of an inquiry into the murder is a welcome decision although dozens of such investigation committees formed in the past have culminated into stark failure. Yet, we wonder what apologies to Balochistan from leaders like President Zardari or Imran Khan mean when elements responsible for Baloch genocide are not exposed and brought to justice.