US state department’s statement is fruition of years of earnest endeavors. Hyrbyair Marri. 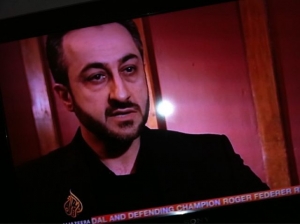 London: “US concern on genocide and human rights abuses in Balochistan is an encouraging breakthrough, which we consider the actualization of our efforts,” said Baloch patriotic leader Hyrbyair Marri in a statement released on Wednesday.

Mr. Marri said: “Though the Baloch miseries and mayhem started the day Balochistan was occupied but a rapid increase in barbarities was seen from 2005 onwards and it has now taken the shape of a human catastrophe. Since July 2010 more than 300 innocent Baloch have been killed and dumped on roadsides and barren lands.

“According to VBMP more than 40 dead bodies are beyond recognition because of continuous exposure to harsh weather and wild animals. The ones who were recognized have been tortured to the extent that it shames humanity. Their bones have been broken, eyes have been plucked, bodies desecrated, and some killed with hunger and thirst. The torture marks on the bodies of killed Baloch or those who survived and were found in badly injured condition give the glimpse of brutalities the detained Baloch go under in Pakistani detention centers.”

Mr. Marri further said that the silence by civilized world is beyond comprehension. The world that is even savior of animal rights is criminally silent on the genocide of Baloch and it is a big question mark. They try their best to save the lives of animals but cannot see the Baloch mothers who are going through immense pain because of extra-judicial killings of their innocent children.

“Now that American state department has expressed their concern on extrajudicial killings and forced disappearances we want to bring it in their notice that Baloch nation is not only facing state terror but also bearing crimes against humanity by Pakistan Army. Torching villages, bombing civilian populated areas and forcing them to leave their homes, destroying farming lands are the inhumane crimes which can be evidently spotted but unfortunately no media or journalists have access to the area which is under Army siege.

The Baloch patriotic leader said that it is pity that those Baloch who run for their lives to other cities are not even spared from the wrath of Pakistani military. Not only the Baloch residing in Sindh have been subjected to brutalities but those who took refuge in Afghanistan were chased and attacked by Pakistani state and her agents.

“Although late but the International powers have finally seen the barbarities committed on Baloch nation but it must be cleared that the all human rights abuses in Balochistan can only be stopped when Balochistan becomes independence.

American diplomat Chris Mason, in an article, admitted that religious extremism and regional instability can only be countered with the independence of Balochistan, which confirms our opinion and stance,” Said Hyrbyair Marri.

Mr. Marri said, “The Baloch nation is now ideologically aware that only complete Independence from slavery can guarantee the Baloch identity, culture and history. The organized activism and defensive struggle of Baloch youth has paralyzed Pakistani infrastructure in Balochistan and now Pakistan has no choice but to leave the Baloch land.

“We appeal America, Europe and all International powers to adopt a stern stance on Pakistan’s double faced policy of religious extremism. The International community should support the Baloch progressive force in their struggle for freedom. The world should support the Baloch pro-independence forces in the same fashion as they did in Libya to topple 40 years old dictatorship.”

The Baloch leader further said, “If America and other civilized nations kept silence on human rights abuses in Balochistan, Pakistan will consider it a clean chit to escalate its barbarities there and will make the region a sanctuary for terrorism and religious extremism, which will be very harmful for the whole world.”