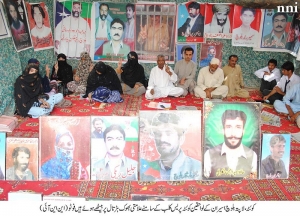 Occupied Balochistan: Police have found yet another bullet-riddled body of missing person near Khuzdar district on Monday. The body was shifted to districts headquarters hospital Khuzdar where he was identified as Abdul Ghafoor Rodini who had been missing for a month. “Ghafoor was abducted along with two other people, including BNP activist Nabi Baksh Mengal, from Industrial Town of Hub last month.

The body of Nabi Baksh was found during the holy month of Ramdan near Hub town,” a police official said. The body was shifted to Hub Town for burial. The motive behind the killings could not be ascertained. However, Baloch political parties blame state functionaries, especially the ISI, (Inter-Services Intelligence) MI (Military Intelligence) and FC (Frontier Corps) of kidnapping and killing of Baloch political activists.

More abductions: Pakistani security forces are continuing their criminal acts of abducting Baloch youth with impunity. Lately they have abducted at least three men from different regions of Balochistan. Two of the men are said to be resident of Paliri and Jiwani area of District Gwadar whereas the third youth belong to New Kahan Quetta. According to sources Pakistani forces abducted Abdul Khaliq (Maulana) s/o Hamid Baloch from Paliri area of Gwadar on 14th September 2011, his whereabouts are still unknown. Separately, Abdul Mutalib was abducted from coastal town of Jiwani while he was travelling from Jiwani to Gwadar.

The third victim has been named as Fateh Khan Marri, a labour and resident of News Kahan Quetta. Marri has been abducted from his fruit stall in Hazar Ganji New fruit and vegetable market on 15 September 2011.

Continued Protest: Meanwhile, the token hunger strike of the families of Baloch enforced-disappeared persons has entered its 434th day on Monday. It must be noted that families of Baloch abducted activists have been sitting on token hunger strike under the banner of “The Voice for Baloch Missing Persons” in front of Quetta press club. They demands have been the safe and early release of their loved ones, who have been abducted by Pakistan’s security agencies, stop disappearing more Baloch and to bring the perpetrator of such crimes against humanity to justice.

The Voice for Baloch Missing Person has recently expressed its distrust in the JIT (Joint Investigation Team) which the government had constituted to find the missing persons. The VMBP believes that it is delay tactic of Pakistani authorities and giving more time to the security agencies to carry on the abductions and under-custody killings of Baloch activists.

The Vice Chairman of the Voice for Baloch Missing Person, Mr Qadeer Baloch, told media men that Pakistan’s security agencies have threatened the Baloch families and member of his Organisation to end their strike or prepare to face the dire consequences. He, however, made it clear that their struggle for the release of Baloch abducted persons and justice will continue and they cannot be intimidated by such threats.