Unrest in Rask after arrest of some prominent Sunni Baloch scholars 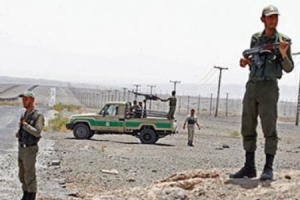 Occupied Balochistan: Following the arrest of Maulvi Abdul Ghaffar Naqshbandi son of a prominent Scholar and the emaam of central Masque of Rask, people took to streets in the Rask, the main city of Sarbaaz, Balochistan. Security forces’ direct firing killed one person and injured two others.

According to Sunni online (Website) from Rask, a city of Sarbaaz Balochistan, Public protests and demonstration were held against the arrest of prominent Sunni scholars that prompted the Iranian security forces to fire live rounds at the protestors. As the result of direct firing one individual, Jan Mohammad Dehghani, was killed and two others were wounded.

The protests and adverse events, in response of "Maulvi Abdul Ghaffar Naqshbandi", son of Maulana Fateh Muhammad Naqshbandi, the emaan of Friday prays at Rask Masque, who also accompanied Maulana Abdullah, emaam of Friday prayers in Paarod area of Sarbaaz and 13 others from the region, who were arrested on their way back from Zahedan where they went to pursue the issue of Maulvi Abdul Ghaffar’s father's case. The Baloch scholars and their companions were stopped at Rask check post by Iranian security forces and immediately arrested.

This action was met with reactions of women who had witnessed the incident and informed the public about the arrest of the scholars. Soon the people started to join the protest in bulks and the entire Rask city was in chaos. According unconfirmed reports the Baloch women who witnessed the arrest of Baloch scholars were later arrested and taken away by Iranian security forces.

There has been report of similar demonstrations in, Jakigwar region of Sarbaaz by the people.

According to reports the city of Sarbaz is still tense but the security atmosphere prevails over town.

It is to be noted that Iran security forces have arrested and executed several Baloch and Sunni Muslim scholars in bogus charges. Currently hundreds of Baloch are being detained by the Iranian regime. Several credible human rights organisations including the Amnesty International have expressed their concerns about illegal arrest and executions of Sunnis and Baloch by the Iranian Regime.