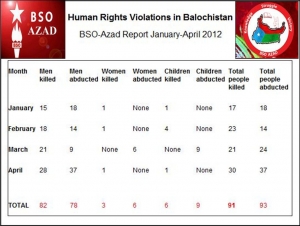 Occupied Balochistan: The largest and most active Baloch student Organisation, BSO-Azad, in Balochistan has released the report of on-going Human Rights Violation of first four months of the 2012.

The report was published on BSO-Azad’s official website (www.sagaar.org) which explains in details the number of abductions and killings of Baloch men, women and children in past four month by Pakistani security forces. According to the report in first four months of 2012 at least 91 people were killed and 93 have been abducted by the security agencies of Pakistan. The killed victims include 82 men, 3 women and 6 children whereas 78 men, 6 women and 9 children have reportedly been abducted across Balochistan.

To read the complete report released by BSO-Azad click on following link: http://sagaar.org/modules/content/index.php?id=7
http://www.balochwarna.com/modules/news/article.php?storyid=3540
Posted by Mohim Baloch at Friday, May 11, 2012