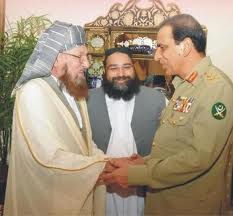 Despite the earlier assurances that banned outfits will not be allowed to hold a rally in Islamabad, the DPC, which also includes several organisations of the sort, held a public meeting and took out a march in the federal capital. As an understanding between the relevant quarters, three leaders of banned groups were disallowed to enter the city. Lesser leaders of the outfits, however, spoke on the occasion. What is more the crowd mostly comprised the activists of these groups working under different names.Almost every speaker called for jihad against the US which was accused of interfering in Balochistan through “American terrorists”. Instead of realising that the rise of militancy in the province was in the main the outcome of decades of neglect and use of military force, killing of Nawab Aklbar Bugti, forced disappearances and custodial killings,