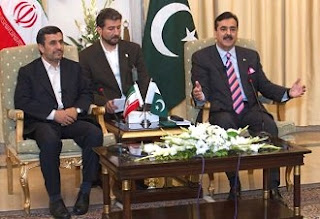 Pakistan on Thursday stressed the need for multi-faceted cooperation between Pakistan, Afghanistan and Iran on the basis of their being close neighbours, to address the numerous challenges and exploit opportunities within the region.

For its part, Tehran offered to boost bilateral trade with Islamabad to $10 billion within two months, and showed an interest in buying wheat and rice from Pakistan.

Thursday was a busy day in the federal capital as President Asif Ali Zardari and Prime Minister Yusuf Raza Gilani held separate meetings with Iranian President Mahmoud Ahmadinejad and Afghan President Hamid Karzai, both of whom arrived here for a trilateral summit scheduled for Friday (today) to be followed by a joint news conference.

Gilani also held delegation-level talks with President Karzai and his team in which Chief of Army Staff General Ashfaq Parvez Kayani and DG ISI Ahmad Shuja Pasha also participated. In his meeting with Ahmadinejad at the Aiwan-e-Sadr, President Zardari stressed the need for enhancing bilateral cooperation between Pakistan and Iran for promoting peace, stability and economic progress for the peoples of the region and of the two countries in particular.

President Zardari proposed encouraging barter and trading in local currencies between the two countries besides removing tariff and non-tariff barriers. Both leaders decided to boost mutual coordination in an attempt to face common challenges. The president also said that Pakistan and Iran could benefit in the trade of wheat, fertilisers, cement and other commodities.

Briefing the media, the president's spokesperson Farhatullah Babar said that during a one-on-one meeting followed by delegation-level talks on the sidelines of the trilateral summit, the two leaders held wide-ranging discussions on a number of key bilateral, regional and international issues.

From the Pakistani side, the delegation-level meeting was attended by Defence Minister Chaudhry Ahmad Mukhtar, Foreign Minister Hina Rabbani Khar, Interior Minister Rehman Malik and other senior officials, among others.

Farhatullah Babar told the media that President Zardari welcomed President Ahmadinejad, and hoped that his visit to Pakistan on the occasion of the trilateral summit would provide immense opportunity for the two countries to further bolster bilateral cooperation in diverse areas particularly trade, energy, security, communication and infrastructure.

The spokesperson said that rail and road links between the two countries, energy projects, the early realisation of the Iran-Pakistan gas pipeline, and other projects of regional connectivity were also discussed during the meeting. President Zardari reiterated his commitment for expeditious implementation of the Iran-Pakistan gas pipeline project and the 1,000 MW electricity transmission line and 100 MW Gwadar port power supply in order to meet the country's growing demand for energy and power.

The president thanked the Iranian government for the relief assistance provided for the rehabilitation of flood affectees in Pakistan.

The two sides also agreed to put in place effective arrangements for better coordination between border control authorities to prevent border skirmishes. Ahmadinejad thanked Zardari as well as the Pakistani government for the warm welcome bestowed to him, and appreciated the role Pakistan was playing in the promotion of regional stability and peace, as well as its keen interest in further strengthening existing cordial relations with Iran. He said Pakistan was an important neighbour of Iran and assured continued support and assistance from his government in all sectors.

Earlier, the Iranian president was received by President Zardari and Prime Minister Gilani at the Aiwan-e-Sadr. The national anthems of the two countries were played and President Ahmadinejad was presented a salute by a contingent of the Pakistan Army, Navy and Air Force. The Iranian president also reviewed the guard of honour.

Afghan President Hamid Karzai will later join the two for an informal round of talks. In his one-on-one meeting with Karzai, President Zardari reiterated Pakistan's commitment to work together with the Afghan president for further enhancing bilateral relations, and evolving an institutional approach to deal with the common challenges facing both countries; he also underlined the need for the two countries to stay together at this critical juncture and avoid being distracted by momentary events.

Briefing the media, Farhatullah Babar said that during themeeting the two presidents discussed a range of issues including bilateral relations as well as the regional situation, the internal situation in Afghanistan, developmental projects in the region, Pak-Afghan Transit Trade Agreement, drug trafficking and border issues.

President Zardari said that his government was pursuing a consistent policy to strengthen Pak-Afghan bilateral relations in all spheres as Afghanistan was at the heart of the region and played a pivotal role in regional economic development. The president reiterated Pakistan's principled stand of supporting an Afghan-led and Afghan-owned political process of reconciliation and peace in the country. He also said that multifaceted cooperation between Pakistan, Afghanistan and Iran, being close neighbours, was essential to address the challenges and exploit opportunities in the region.

The two presidents agreed upon the need to resolve all issues and remove bottlenecks if any, in the way of the Pak-Afghan Transit Trade Agreement. President Zardari underlined the need for working together to extend Pak-Afghan Transit Trade Agreement to the Central Asian countries, which, he said, was a doable project and would not only benefit the people of the region but also generate huge economic activity in Afghanistan.

He urged that the two sides should accord priority to all energy-related projects to meet growing energy needs and expedite the process of development. The president also emphasised upon the early implementation of CASA-1000 project, TAPI and other infrastructure projects.

President Zardari said that Prof Buhanuddin Rabbani had been a friend of Pakistan and assured that Pakistan will continue to extend full cooperation to the Afghan government's investigation in the assassination of Prof Rabbani, and said that a Pakistani team had recently visited Kabul in this regard.

In their meeting at the PM House on Thursday evening, Prime Minister Gilani and President Ahmadinejad agreed to pursue energy projects including electricity and gas on fast-track basis.

The two leaders exchanged views on matters of mutual interest in a frank and cordial atmosphere. They discussed the status of Iran-Pakistan gas pipeline as well.

The Iranian President said that his country was ready to enhance trade with Pakistan up to $10 billion within a couple of months. Both leaders also decided to improve the border management to facilitate transportation of goods. Both sides showed their willingness to open a new border point at Gabd and Reemdan between the two countries along the coastal highway of Pakistan. The Iranian side also indicated its keen interest to import one million tonnes of wheat and 200,000 tonnes of quality rice from Pakistan within weeks.

The Pakistani side was apprised of the progress made in connection with opening the Pakistan Consulate General's office at Bandar Abbas to facilitate trade and travel.

The prime minister also extended his deep sense of gratitude to the Iranian leader on his country's provision of electricity to the Gwadar area. He said that the import of electricity from Iran would partially alleviate the electricity deficiency in the country.

Earlier, Prime Minister Gilani also held bilateral talks with Afghan delegation headed by President Karzai at the PM's House. Both sides agreed on the need to strengthen mutual cooperation and expressed their resolve to work for the stability and peace of both countries.

Both sides reviewed current developments in and around the region relating to peace and stability. They also discussed bilateral cooperation in the fields of trade and commerce, infrastructure development, regional transit trade and cross-border movement.

The prime minister appraised the Afghan delegation about several initiatives which were currently underway to promote peace and stability in Afghanistan.

Afghan President during the talks said that Pakistan and Afghanistan were twin brothers and therefore should cooperate in the same spirit for the sake of peace and stability in both countries.