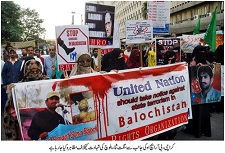 Demonstration of Punjabis! Not Baloch´s!
The Baloch Hal News

QUETTA: The Difa-e-Pakistan Council (DPC) has described the situation in Balochistan precarious and urged the government to initiate a process of “meaningful dialogue” with genuine Baloch leadership.

Military operation should be stopped forthwith wherever it is being conducted particularly in Balochistan.

These demands were made during All Parties Conference organzied by Difa-e-Pakistan Council in Quetta at local hotel on Monday. Chairman Difa-e-Pakistan Maulana Samiul Haq read out the declaration of the conference.

Government should hold meaningful dialogue with the concerned Baloch leaders to find out a permanent solution to this serious problem. Difa-e-Pakistan Council categorically stated that they would back all the demands of Baloch leaders, excluding independence for Balochistan.

They announced that Difa-e-Pakistan Council would mark March 10th, throughout the country in solidarity with Balochistan. The council also formed a committee to prepare a draft over Balochistan issue after consulting with all stakeholders. The committee will propose solution which would be handed over to government. The perpetrators of Nawab Akbar Bugti murder case as such former President Retired General Musharaf must be made accountable and brought to book.

“The extra-judicial killings by Frontier Corps (FC), Police or any other Law enforcement agencies, practices of enforced disappearances and military operation in Balochistan should be ended soon. Government should ensure the implementation of its announcement about withdrawal of Army from Balochistan,” stated in the declaration.

Addressing a press conference after Balochistan Conference, DPC, Maulana Sam-iul- Haq said the rulers had complicated the problems of Balochistan in such an extent that it had become difficult to find a solution and to persuade the Baloch leaders.

He said that there was no difference between the policies of Former President Retired Pervez Musharaf and President Asif Ali Zardari over Balochistan. Thus, the province was suffering from its worst crisis.

He said the problems of people of Balochistan could not be resolved by announcing packages, appointment of committees or tendering apologies but provincial autonomy will have to be ensured.

He said that the resources belong to Baloch people and they should be given their due rights, besides government should take practical steps instead of making rhetoric and tall claims. He also condemned the US resolution on Balochistan saying it is an attack on Pakistan’s sovereignty. “After its defeat in Afghanistan, Washington is hatching a conspiracy to break Pakistan,” he alleged.

He said another purpose of the conference was to give a measure to US, India and Israel to stay away from the situation in Balochistan. He said the DPC would not only help the Baloch people in healing their wounds but also identify those who were behind their woes

General Secretary Jamat-i-Islami (JI) Liaquat Baloch said we have come here to ensure the people of Balochistan that Difa-e-Pakistan Council was struggling for the rights of Baloch people.

The chief of Jamaat ul Dawa Hafiz Saeed Ahmed said the leaders of Difa-e-Pakistan council were with the Baloch people in this critical juncture. “We will come again here to highlight the plight of our Baloch brothers” he added.

Pakistan Muslim league (PML-Zia-ul-Haq) chief Ijaz ul Haq said government was not sincere in addressing the issues of Balochistan. “Dif-e-Pakistan Council will also not take part in the All Party Conference being convened by Prime Minister until government takes some practical steps. Pakistan’s sovereignty was linked with Balochistan thus practical steps are desperately needed for resolving the problems of Baloch people.”

He said that Military leadership should come in Balochistan and listen to the problems of Baloch brothers since the political leadership has failed to address the grievances of Balochistan.

Difa-e-Pakistan Council also announced that it will hold a huge gathering in Balochistan on April 12th, 2012.

It is pertinent to mention that all the Baloch and Pashtun nationalist parties have declined the invitation by Difa-e-Pakistan Council for All Parties Conference.