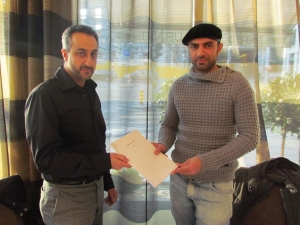 London: Baloch patriotic leader Nawabzada Hyrbyair Marri has called on the leader of BRP, Nawabzada Brahumdagh Bugti, in switzerland, to express his condolences on the murder of his sister and niece in Karachi.

According to details on 11 February, 2012, Baloch leader Hyrbyair Marri along with Dr Mostafa Baloch visited Brahumdagh Bugti in Geneva to pay their condolences on the demise of his sister and niece who were murdereds by Pakistani intelligence in Karachi on 31 January 2012. It must be noted that Pakistan’s military have killed several Baloch women children during military operations.

On 12 February 2012, Baloch leader Hyrbyair Marri and Dr Mostafa Baloch once again met Brahumdagh Bugti to present him the Balochistan Freedom Charter which is under making. Both leaders exchanged view about the current deteriorating situation of Balochistan and other political issues. They also discussed the Freedom Charter and Mr Marri explained to Brahumdagh Bugti about the work so far done on Charter and presented it to Mr Bugti for his comments and suggestions.

The Baloch leaders while talking about the importance of freedom charter said that it would help unite Baloch Nation and further organise the Baloch freedom movement. Both leaders emphasised and agreed that unity is crucial for Baloch Nation. They further said that the enemy is indiscriminately killing Baloch activists and doing anti Baloch propaganda at all levels. Hence, it is important that Baloch Nation must also unite and strengthen Baloch freedom struggle on scientific basis.

Mr Marri and Mr Bugti said that “We need to galvanise the struggle and explain the purpose of Baloch freedom movement to International Community and convince the international powers that Independent Balochistan will guarantee stability in the region and peace in world. We will have friendly relations and mutual understanding with all civilised Nations.

The statement further said that Hyrbyair Marri will soon contact other important Baloch leaders to discuss the issue of Baloch unity and freedom of Balochistan. He will also present Freedom Charter to other Baloch leaders for their suggestions and comments.