Letter from Noam Chomsky: The situation in Pakistan is volatile, the number of disappearances astounding. 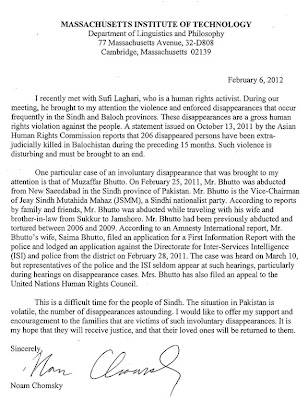 Sindh Monitor: On January 31st, we had the incredible opportunity to meet with Dr. Noam Chomsky and share with him some of the issues affecting Sindhi Sufis. Dr. Chomsky is a world renowned linguist, philosopher, and outspoken human rights activist. Our meeting was wonderful and fruitful. One of the products of that meeting was a letter from Dr. Chomsky to the families in Sindh affected by enforced disappearances. The letter expresses his support for the families. We would like to share that letter with you. It is my hope that this letter will be circulated in Sindhi Sufi circles and that it will provide support and comfort to many people facing injustice in Sindh. Please feel free to share this letter and post it to distribution lists.

Thank you for your support of Sindh and Sindhi people!


Noam Chomsky letter to people of Sindh and Balochistan

I recently met with Sufi Laghari, who is a human rights activist. During our meeting, he brought to my attention the violence and enforced disappearances that occur frequently in the Sindh and Baloch provinces. These disappearances are a gross human rights violation against the people. A statement issued on October 13, 2011 by the Asian Human Rights Commission reports that 206 disappeared persons have been extra-judicially killed in Balochistan during the preceding 15 months. Such violence is disturbing and must be brought to an end.

One particular case of an involuntary disappearance that was brought to my attention is that of Muzaffar Bhutto. On February 25, 2011, Mr. Bhutto was abducted from New Saeedabad in the Sindh province of Pakistan. Mr. Bhutto is the Vice-Chairman of Jeay Sindh Mutahida Mahaz (JSMM), a Sindhi nationalist party. According to reports by family and friends, Mr. Bhutto was abducted while traveling with his wife and brother-in-law from Sukkur to Jamshoro. Mr. Bhutto had been previously abducted and tortured between 2006 and 2009. According to an Amnesty International report, Mr. Bhutto's wife, Saima Bhutto, filed an application for a First Information report with the police and lodged an application against the Directorate for Inter-Services Intelligence (ISI) and police from the district on February 28, 2011. The case was heard on March 10, but representatives of the police and the ISI seldom appear at such hearings, particularly during hearings on disappearance cases. Mrs. Bhutto has also filed an appeal to the United Nations Human Rights Council.

This is a difficult time for the people of Sindh. The situation in Pakistan is volatile, the number of disappearances astounding. I would like to offer my support and encouragement to the families that are victims of such involuntary disappearances. It is my hope that they will receive justice, and that their loved ones will be returned to them.