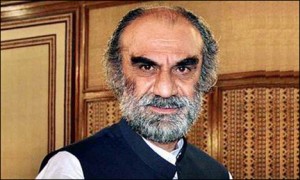 ISI and the Pakistani military has dictated what Raisani to say to the to the Ambassador of European Union (EU) Lars Gunnar Wigemark(this comment is from BC, not from The Baloch Hal!)
The Baloch Hal News

QUETTA: Chief Minister Balochistan Nawab Aslam Raisani has said that there were confirm information of foreign intervention in Balochistan, saying they believed in dialogue but the disgruntled Baloch who have climbed mountains did not respond positively to their offer.
He said that if Balochistan separated from Pakistan, a devastating civil war would start which would be detrimental for the people of Balochistan.
He expressed these views while talking to the Ambassador of European Union (EU)
Lars Gunnar Wigemark who called on him here on Monday.
Chief Minister said that dialogue were necessary for the situation of Balochistan but those people who had climbed up mountains were not ready for accepting less than independence.

He apprised EU envoy about the typical situation of Balochistan, saying every Nawab and chieftain had his own area and were independent, in case of separation it would not be possible to maintain law and order and normal life rather a destructive civil war would be started.
He told that at federal level it had been decided to initiate dialogue in Balochistan at high level and in this regard governor Balochistan Nawab Zulfiqar Ali Magsi, he himself (CM) and other tribal notables would play an important role.
He said , this was his view that problems like missing persons and recovery of their decomposed bodies would deteriorate the situation and increase hatred. We not only condemn these incidents but also view them with hatred, Raisani added.
The chief minister said that there were some names listed in the missing persons but they were present in Afghanistan and Dubai and running business.
Referring to the kidnapping of officials of Balochistan Rural Support Program (BRSP), he said that provincial home secretary had visited Peshawar along with head of BRSP and soon they would hear a good news in this connection.
The chief minister told EU ambassador that few days back Prime Minister had summoned a meeting of Balochistan consultation committee in which he had demanded more jobs for the youth of Balochistan and development founds so that the process of development could be accelerated in the province.

The chief minister appealed to the EU for helping Balochistan in promotion of technology and science sectors. Upon which the EU ambassador assured his cooperation in this connection.