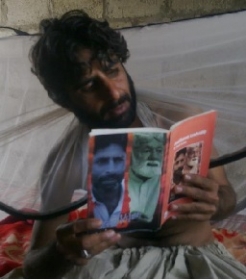 According to details Faraz Karim Baloch and Faisal Bashir Baloch were stopped at a police check point while they were on their way home. After exchange harsh words between the Police and the two Baloch activists the frustrated Pakistani police could not hold their anger and let it out on the Baloch activists by shooting them dead on spot.

Faraz Karim was the Panjgur district information secretary of Baloch Republican Party (BRP), a freedom seeking political party in Balochistan headed by Brahumdagh Bugti. Faraz was also a prominent Balochi language poet and a writer. Faisal Bashir had no political affiliation with any organisations.

Meanwhile the Baloch National Movement (BNM) has strongly condemned the act calling it ‘continuation of state sponsored terrorism’ in Balochistan. The Central spokesman of BNM said Faraz Karim and Faisal Bashir were intentionally target killed by the police to prove its alliance with the Frontier Corps who are directly involved in committing worse human rights violations in Balochistan.

The Baloch National Front (BNF), an alliance of pro-independence parties, observed a complete shutter down protest in Panjgur on Tuesday. All shops, markets and banks were closed down in protest against the killings of the two young men.

Baloch Liberation Front warning: The Baloch Liberation Front's (BLF) spokesman Doda Baloch paid tribute to the young martyrs and warned the Police to refrain from patrolling around Panjgur. Talking to NNI news agency via satellite phone from unknown location, Mr. Baloch said previously Baloch fighters had avoided attacking the Police as they thought the police were one of the most basic and powerless element of the state. However, the indiscriminate the brutal and wanton killing of two peaceful civilians illustrate that the police is also crime partners of the FC, ISI and MI in Balochistan. Mr Baloch they will have to face the consequences of their complicity with state sponsored terrorism.