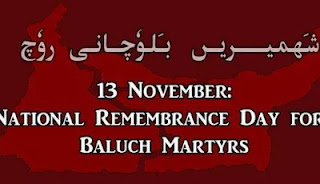 QUETTA: The Free Balochistan in a statement from London has announced to organise memorial events in Balochistan and abroad on 13 November to pay tributes to martyrs of Baloch freedom struggle.
Around 177 year ago when the British attacked and divided Balochistan into three parts, Balochistan was a united county. The Baloch ruler Mir Mehrab Khan and his companions embraced martyrdom on 13 November, 1839 while defending his country [Balochistan] against British aggressors.
The FBM said, “November, 13 has been chosen to pay homage to those brave sons and daughters of Baloch …