How Panjgur is losing the battle 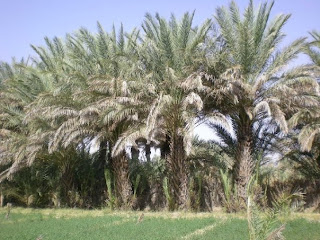 I have not been blogging for the past few days. I was in my hometown of Panjgur to celebrate the Eid festivities. Panjgur is located on Pakistan-Iran border. For a long time, the place has been popular for its delicious dates. People no longer flaunt about the dates of Panjgur nowadays after a virus called Sherago caused severe damage to the date production. The problem has been there for more than four years with the provincial agriculture department doing too little about it despite the ironic fact that the provincial agriculture minister, Mir Asadullah Baloch, belongs to the same district.

Panjgur is one of the few places in Balochistan where tribal system was abolished centuries ago. Therefore, one can feel the presence of a large middle class in the area. It is the home to a lot of struggling young men (women still have a longer way to go) to make their mark in the practical life.

Towns like Khudabadan, Gramkan and Sordo have proudly given birth to a few well-known individuals who came from lower or middle class families of Panjgur. Yet, they rose to top positions in the province of Balochistan by virtue of personal commitment to their goals and undeterred struggle.

These proud sons of Panjgur, who have personally impressed me, include:

Waja Faqir Baloch: Born in Gramkan and served as a Chief Secretary of Balochistan

Waja Abdul Malik Baloch: Born in Gramkan and served as a Deputy Chairman of the Senate of Pakistan.

Hakeem Baloch: Born in Gramkan, served as the Acting Chief Secretary of Balochistan, authored more than a dozen literary books in Balochi, Urdu and English languages and is known among the founding fathers of Baloch Students’ Organization (BSO).

Kachkol Ali Baloch: Born in Gramkan, served as the Leader of the Opposition in Balochistan Assembly during the gruesome military regime of Pervez Musharraf.

Ayub Baloch: Born in Sordo and served as the secretary information in the government of Balochistan.

Haji Abdul Qayyum Baloch: Born in Khudabadan in August 1925, he laid the foundation of the Balochi Academy, Quetta, the world’s largest academy of Balochi language.

When you walk in Mekran (the region comprising of Panjgur, Turbat and Gwadar), one of the first things you notice is the stiff competition between the people of Panjgur and Turbat. While both the districts have had marvelous collective contributions for Balochistan, internally they undergo a constant debate as to who is doing better in the domains of education, civil service examinations and possession of jobs.

During the 1990s, Panjgur went through tremendous social transformation with the establishment of some stupendous private educational institutions. Zahir Hussain, rather Sir Zahir Hussain, as the locals call the USA-educated pioneer of The Oasis Academy, undeniably had the greatest contribution for this social transformation of the society. The Oasis Academy, which was previously called as the American English Language Center, inculcated modern and progressive thoughts in the minds of the students and gave them a modern vision of life. Today, hundreds of students from this particular academy in one of the most backward parts of Balochistan have walked out of their district to attain higher education. Social change is an evolutionary process. It takes a lot of time. Sir Zahir had the patience and the courage to dream. He truly brought a change in his area.

Today, you find many young men from Panjgur straining for a better future somewhere in someway. This may not appear to be a big change for someone living in Islamabad, Karachi, Lahore or even Quetta. I still consider it as a major change when kids living in huts and wooden cabins of Balochistan yearn for change. It always takes an age for the smaller change to become a big change noticed by the whole world.

The people of Panjgur claim without any valid reference that they hold more bureaucratic offices in the region as compared to their counterparts hailing from Turbat. According to the Panjguris, the people from Turbat call them “the other Punjabis’. This phrase fits in Balochistan’s larger political arena where the Balochs complain that the Punjabis have dominated every sphere of life.

Despite belonging to Panjgur, I disagree. I have more respect for the collectively struggle of the people of Turbat. Turbat is home to more bookshops, libraries, academies, non-governmental organizations, community-based organizations, and educational institutions. More boys and girls from that town brave to travel and opt for higher learning. What I admire very highly is the liberal mindset of the people of Turbat towards religion and politics.

During my recent trip to Panjgur, I was devastated to see the change in the Panjguri society. Unfortunately, the positive social change has begun to reverse. There is more radicalization of the society than ever before. Pessimism encouraged by the clergy has made the youth absoluate rejectionists. They reject worldly progress. They abhor entertainment. The erstwhile change-makers had now begun to succumb before the orthodoxy. I saw a different Panjgur from the one that I had seen and lived in during my teenage days in 1990s.

The Panjgurian society has stopped reading and intellectually debating on the issues. While we thought the small change brought by the English language centers would one day culminate into a major educational revolution, the change in itself has stopped all in a sudden. Today, you can not get a single English language newspaper in the town. I can recall how easy it was some years ago to get a copy of Pakistan’s premier English language newspapers like Dawn, the News and The Nation or at least the Balochistan Times. Now, you do not get any of these newspapers.

I spoke to a few “liberals” of the town as to why the society was deliberately pushing itself towards backwardness. They made a number of excuses. They said the national English newspapers had stopped coming to Panjgur because there was no proper transportation system. The next moment, I asked if I could get a copy of Zarb-e-Momen, the pro-Jihadi Karachi-based weekly newspaper, I was cheered with a Subhanallah [words of praise], “Oh sure! Why not? Do you want some older issues along with the fresh edition?” It is easy to find Jihadi literature in Panjgur as compared to progressive literature.

On the contrary, the liberals in Turbat have not allowed this to happen. You can still get a copy of Newsweek,Time, the Economist or the Readers’ Digest in the defunct headquarters of the Mekran division. I was very surprised to see dozens of copies of each Urdu novel in a local bookstore there. You can effortlessly grab your copy of works by Asmat Chugthahi, Saadat Hassan Manto, Qurat-ul-Ainn Haider or progressive stuff by Syed Sabat-e-Hassan, Iqbal Ahmed, Tariq Ali and Mubrak Ali. In the local genre, you will not miss Syed Zahoor Shah Hashimi, Murad Saher or Atta Shad.

On the other hand, in Panjgur, home to around three hundred thousand, one cannot get a single English newspaper to read. In terms of Urdu literature, no shop in any corner of this town has a single Urdu novel written by anyone to sell.

I was told that a lot of money was coming from Saudi Arabia, Kuwait and many other Arab countries these days to radicalize the Baloch society. Religious schools are mushrooming. Outsiders are nipping to the town to get education from the religious schools lavishly funded by Arab countries. Interestingly, the language centers that once played a magnificent role in the development of the society have now began to teach the kids the translation of short Quranic verses, the six Kalimas and the religious prayers prescribed for eating, sleeping etc. “Perverted images” from the New American Streamline textbook have been removed and “filthy words” such as “love”, “kiss”, “sexist” have been “carefully relocated” in order to “ensure” the “sanctity of the classrooms”

The Pakistani Establishment, fully cognizant of these developments, is delightedly viewing this process of Islamization of the Baloch society. Foreign money has made the local clerics of the most influential political and economic stakeholders of the society. More and more foreigners are entering the town without legal documents. In my childhood, I had not heard of Turks and Uzbaks coming to Panjgur. Today’s Jang, Pakistan’s most circulated Urdu newspaper, reports the arrest of three Turks and one Macedonian national from Panjgur. Where do they come from? Who is sponsoring these trips? What is actually happening in my town?

Baloch nationalists in Panjgur have lost to the Mullah and pro-establishment nationalists. The level of nationalistic awareness has embarrassingly declined. A town once known for its liberal writers, intellectuals and committed nationalists is gradually derailing. Not many people truly realize in the area how much you lose when you shut a library. It is the society that becomes the biggest loser when cricket/football tournaments and Balochi musical programs stop taking place.

The only “good news” I heard about Panjgur was about the allotment of a huge area in Khudabadan town by the government to the Tabligee Jammat (the group of Islamic preachers) to conduct a huge congregation of the Islamic preachers in the town.

“You see we have become very lucky by now,” boastfully mentioned the young boy sitting beside me on the bus on my way back to Quetta, “Allah has chosen by His blessings the town of Panjgur for this august annual gathering. Every year, around two hundred thousand Muslims come from Iran, Afghanistan and all over Pakistan to cogitate about the fate of the Muslim Ummah.”
“Has the government allotted land for any libraries in the area,” I inquired.
“What are they?” he asked back.
“Oh sorry. You don’t kno them. Are there any universities in the area for the students?” I tried to find out.
“No. There are no transportation facilities. Who will come and go to a university?” he replied.
“Has the government provided the town with a railway track by now?” I asked again.
“No. No one takes interest in the development of the area,” he added.
“Any industrial units?” I went on.
“No. They are an agent of distraction. If you have a lot of money around you then you will never think about your life hereafter. We are glad we don’t’ have them,” he explained.
“So who makes arrangements for a mammoth religious gathering in this tiny town,” I asked.