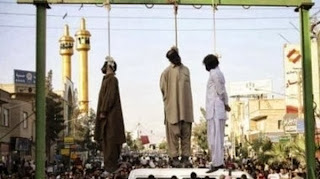 Zahidan : The Iranian regime has executed at least 15 innocent people at the central prison of Zahedan city of Iranian occupied Balochistan on Saturday morning. The prisoners who were held under section 1 of youth imprisonment, Section 2 of women act, Section 5, section 7 and 3 were transferred to solitary confinement from the Intelligence Bureau in central prison of Zahedan and hanged. Sources further reported that on Thursday 18 September, 15 prisoners from different sections and cells were isolated from the Intelligence Ministry and transferred to the central prison of Zahedan. Their all connections were cut off from rest of the prisoners and their families. There is great concern that three of the prisoners who have been transferred from the Intelligence Bureau are probably political prisoners. During the transfer the victims’ faces were covered with sacks that is why it had been difficult to identity all of them. The details of prisoners who were executed for each item is as follows : 2 people from section 1 juvenile imprisonment , 2 people from section 2, 1 person from section 5 , 2 female prisoners from female ward , 4 people from section 7 and 3 people from the information section. The Iranian fascist regime has executed hundreds of Baloch under secrecy but some are hanged in public to make them an example for others and create fear in the community. The identities of some of the victims have been confirmed as following: 1. 1 Hamza Ghamshadzahi 30 years old, he was imprisoned in Zahedan central prison under 7 from more than two year. 2. Shah Mohammad Barahouee 33 years old, he was imprisoned for 2 years under section 7 in central prison of Zahedan. 3. Nasir Barzang 28 years old, he was imprisoned for 4 years in central prison of Zahedan under section 7. 4. Hussain Sufi 25 -year-old was jailed for five years in Zahedan prison ward 5. The prisoners were kept uninformed about their execution until the very last minute. Generally when prisoners are segregated for execution purpose they are told that they either have meetings with their families or with their legal teams. However, on the other hand their families will not be informed about the fate of their loved ones and most the times even bodies of innocent Baloch victims are not handed over to their families. An organisation called Human Rights and Democracy in Iran has called on the UN High Commissioner for Human Rights, UN Special Rapporteur on Human Rights, UN Special Rapporteur on Executions and Amnesty International to take notice these executions by the moderate regime of Mr Ruhani. Sources say that more than 200 innocent Baloch including 8 women have been executed in secrecy since Ruhani came to power. The numbers of Baloch people executed by Iranian regime is said be very high but due strict rules imposed on media and fear of execution the in-custody deaths often go unreported. http://balochwarna.com/xnews/articles.383/Balochistan-unabated-killing-spree-Iran-executes-another-15-Baloch-including-two-women-in-Zahedan-prison-.html#.Ulu4oicv-O4.facebook
Posted by Mohim Baloch at Monday, October 14, 2013