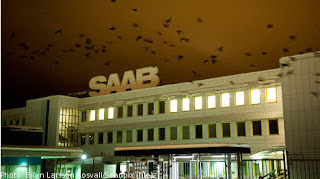 "They were here this morning and submitted the documents requesting bankruptcy," a clerk at the Vänersborg District Court told AFP, adding that the court was currently examining the request.

"The court aims to handle the request and appoint a liquidator rapidly," the statement said.

Saab's owner Swedish Automobile said in a statement that "the company without further funding will be insolvent and that filing bankruptcy is in the best interests of its creditors."

"It is expected that the court will approve of the filing and appoint receivers for Saab Automobile very shortly."

The decision follows Saturday's announcement by GM that it cannot accept any of the proposed solutions presented so far to help save Swedish automaker.

"Each proposal results either directly or indirectly in the transfer of control and/or ownership of the company in a manner that would be detrimental to GM and its shareholders,” GM spokesperson James Cain said at the weekend.

“As such, GM cannot support any of these proposed alternatives.”

Citing sources within Saab, daily Svenska Dagbladet reported on Saturday that the company planned to present a plan to the court on Monday whereby the Swedish automaker would launch a technology development company in the Netherlands, half of which would be owned by Chinese Youngman.

But according to Swedish trade paper Dagens Industri (DI), Youngman, responsible for the last cash injection into the beleaguered Swedish carmaker, is now unwilling to send Saab any further funds.

The reason behind Youngman's decision is allegedly GM's categorical 'no' to any further Chinese involvement.

In a statement, Swedish Automobile confirmed Youngman pulled out of the talks following Cain's remarks.

"After having received the recent position of GM on the contemplated transaction with Saab Automobile, Youngman informed Saab Automobile that the funding to continue and complete the reorganization of Saab Automobile could not be concluded," it said in a statement.

On Monday Saab saw no other solution than to file for bankruptcy.

News agency TT had the news confirmed from Saab CEO Victor Muller himself outside of the Vänersborg District Court on Monday morning.

Muller had been due to appear before the court on Monday as judges had been scheduled to decide whether to lift or prolong the three-month bankruptcy protection Saab had been placed under while it was attempting to negotiate a deal to rescue the company.

Muller has been struggling to put together a deal to save Saab from bankruptcy, primarily negotiating in recent months with two Chinese groups, carmaker Youngman and car distribution company Pang Da.

The attempts to sell Saab to Chinese partners have been seen as the last chance of saving the Swedish carmaker, which was already on the brink of bankruptcy when GM sold it to Swedish Automobile -- at the time called Spyker -- in early 2010 for $400 million.

It has been a rocky road since then.

The carmaker -- which began life in 1937 as an aircraft manufacturer, something which became evident in the aerodynamic, sporty shape of its first concept car designs -- was forced to halt production in April as suppliers stopped deliveries over mountains of unpaid bills.

Saab's some 3,700 employees, whose salaries have been delayed five months running, did not receive their November paychecks. Once the bankruptcy filing is approved, they will be paid through a state wage guarantee.

Saab built its first prototype cars in 1947 with the first production version rolling off the assembly line two years later.