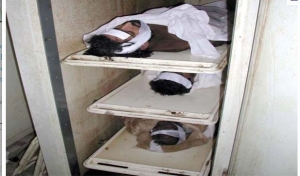 Occupied Balochistan: Three more bullet-riddled bodies of Baloch missing persons, all from one family, were found in the Zero Point area of the Khuzdar district, some 310 kilometres from the provincial capital on Monday, police said.

“Some passers-by spotted the bodies in Zero Point area on Shadadkot Road and informed the police. Police rushed to the area and bodies were taken to the District Headquarters Hospital Khuzdar for autopsy,” police constable Dur Muhammad told Daily Times.

The victims were identified as Allah Baksh and his two nephews, Sanaullah and Bashir Ahmed. They were residents of Ferozabad area of Khuzdar. “They were brutally tortured before they were killed,” hospital sources said, and added that they had been shot in the head and chest and had received multiple bullets in other parts of body. The bodies were handed over to their relatives after the autopsy.

Chairman of the Voice for Baloch Missing Persons, Nasrullah Baloch, said that over 300 bullet-riddled bodies of missing persons have been recovered during the past 15 months.