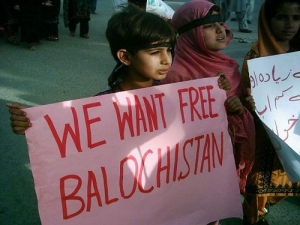 London: The Baloch patriotic leader, Hyrbiyar Marri, has said that the statement by IG FC is totally against the ground realities.

“The IG FC is trying to hide the criminal bigot forces, which he commands. He is coloring the “kill and dump”, which his forces have initiated, as internal conflict between Balochs to fleece in front of International community,” Mr Marri said.

He said that hundreds of Baloch political activists have been whisked away by uniformed personnel of Pakistani forces from busy markets in front of numbers of witnesses. Later these political activists have been brutally killed and the responsibilities have been accepted by dummy organizations. In fact most of them are kidnapped from parts of Sindh and the dead bodies are recovered from thousands of miles away in Balochistan. It is crystal clear that no one but Pakistani forces can act in this manner.

“To silence the peaceful struggle of Baloch youth, along with killings the security forces have now threatened the families of Baloch missing persons who are protesting peacefully against abductions,” He added.

Mr. Marri further said that the military organizations, which are sole policy makers of the country, are attacking NATO containers to extort more money from US. They are labeling these state backed attacks as public reactions, which is very untrue. Pakistani agents are involved in attacking NATO forces and killing afghan people but they claim that these are not state security agents but Talibans. Pakistan has still not abandoned the dreams of conquering Afghanistan.

Mr. Marri congratulated the people of Bangladesh on the historical day of 16th December. He said, “Despite winning the majority seats in elections, Sheikh Mujeeb-ur-Rehman, the Bengali leader, was imprisoned. The oppression and brutalities resulted in the birth of a new state, Bangladesh. The mass killing of millions of Bengalis couldn’t stop the struggle for independence.

He warned the international community about Pakistan’s Mullah Military alliance and said that if it is not stopped urgently the consequences will be very dangerous for the whole world.
http://www.balochwarna.com/modules/news/article.php?storyid=3401
Posted by Mohim Baloch at Sunday, December 18, 2011