Balochistan – a tough pitch for PTI? By Malik Siraj Akbar 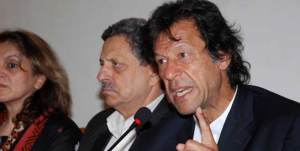 So, the “PTI revolution” is heading toward Balochistan. What is the pitch in Quetta going to look like on March 23? At this point, one hears mixed opinions. One thing is common in people’s responses: They represent two extremes. The pro-PTI section, backed by Imran’s recent apology to Balochistan during the Karachi rally, argues that someone as uncontroversial as Imran can at least mediate in, if not entirely resolve, the Balochistan puzzle. The pessimists frown, “Balochistan is just like medicine,” they warn, “Keep it away from children’s reach.”

Both opinions are valid but not absolutely uncontestable. We oftentimes tend to forget that Balochistan, besides its gradually subsiding secessionist movement, also has a considerable segment of permanent members of the establishment who have historically wasted no opportunity to become a part of the revolution-in-making.

The opportunist politicians’ club in Balochistan is divided into two groups. The first one abruptly smells political change and jumps on the victory truck much before others can even see it. This is primarily a self-proclaimed “pragmatic” group which joins the ‘future ruling party’ ahead of time so that it gets ample time in advance to develop necessary connections inside the party prior to the formation of the future government.
Classic examples of politicians belonging to the above mentioned segment are Retd. General Abdul Qadir Baloch, former Corps Commander and the governor of Balochistan and Sardar Sanaullah Zehri, a leading tribal chief and an ex-interior minister. Both of them joined the PML-Nawaz almost a year ago hoping that a little hard work and well done homework will land them on key positions in the future dispensation.

The second school of opportunist politicians comprises of enraged leaders who have either been ignored in their own parties or who grumble about not receiving sufficient ‘benefits’ from their incumbent parties. You may wonder why these leaders are not respected and patronised in their own parties. Very simple: They have switched so many political parties in the past that their faces are now barely familiar to the senior or junior cadre of their new/current parties.

Thus, the first group, which is shrewdly mindful of the significance of benefits an early bird receives, will suffice with joining the PTI if it gets live coverage on news channels and makes front page headlines. Former president of the Balochistan National Party (BNP-Awami) Moheem Khan, ex-Jamori Watan Party senators Khuda-e-Noor and (who had later on defected to the PML-N), Amanullah Kanrani, a former information secretary of the JWP and Anwar-ul-Haq Kakar, a former PML-Q electoral candidate with little popularity among Quetta’s educated urban class, are some of the likely candidates who may join the PTI to resuscitate their political careers.

As far as the second section of leaders is concerned, it, besides the enraged leaders of ruling parties, also includes those who lead one-man shows locally known as political parties. Don’t get surprised if PTI floods Talal Bugti’s shabby Jamori Watan Party and Zarak Zheri’s PML- Zehri Group (Has anyone ever heard of it?). Senator Lashkari Raisani and Sadiq Umrani, the former and current chiefs of the PPP respectively, are both either discontented with their own parties or with the chief minister. Who knows if Imran is looking to get one of these two precious wickets!

Regarding the JWP, what is still undecided who, between the PTI and the PML-N, will make the first and solid move to influence Talal Bugti to either incorporate the JWP with one of these future ruling parties or at least form an ‘alliance plus’. Although the JWP is unlikely to win a sizeable number of seats in the provincial and the national assemblies, Talal Bugti isn’t as insignificant as his detractors smugly consider him. Let’s not forget, he resides in Quetta’s symbolic Bugti House where most government and opposition leaders go to pay respects to late Nawab Akbar Bugti, Talal’s father, or simply to express solidarity with the disenchanted Balochs.

Imran may not be able to fully win the hearts of the Marri, Mengal and (the pro-Brahamdagh section of) Bugti tribes who stand in the forefront of the Baloch nationalist movement at this juncture. It, nonetheless, does not minimize PTI’s chances of bringing on its side Balochistan’s Pashtun voters who are weary of America’s drone policies in spite of not being fond of the Talibanized version of Sharia which is staunchly championed by the Jamiat Ulema-e-Islam (JUI).
The PTI may upset the JUI if it uses “my name is Khan” card to woo the Pashtun voters. Thus, this move will possibly bring the PTI some Pashtun leaders from the PML-Q, such as Jaffar Khan Mandokhel and Raheela Hameed Durrani, without alerting the ANP (Awami National Party) and the PKmP (Pashtunkhwai Milli Awami Party).

In some Baloch districts, old loyalists of General Musharraf such as former ministers Zubaida Jalal, Shoaib Nosherwani, Balochistan Assembly’s current Speaker Aslam Bhootani and Rubina Irfan are all shaky wickets. Let’s wait and see what transpires after one hundred days of net practice ahead of the Quetta rally. Critics who consider Balochistan a tough pitch will probably have to watch another major upset from the visitors’ gallery. (Courtesy: Dawn.com)