The PPP promised a dialogue to resolve Balochistan’s problems but has so far failed to honour its word. — Reuters 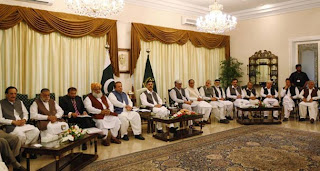 Balochistan is simmering. A low-grade insurgency has gradually been gaining strength and the law-enforcement agencies are finding it difficult to check the violence that now erupts with unfailing regularity in the province. Last Friday, a judge and his aide were killed. The same day a bomb blast in Dera Murad Jamali injured a number of people while two were wounded in a grenade attack in Quetta. There have been more incidents of violence since then.

In May the police disclosed that since the beginning of 2009, more than 200 incidents of shooting, bomb blasts, grenade attacks and abductions had taken place. More than 150 people had died while approximately 400 were injured. Add to this the toll of the last one month — over 20 deaths and at least 125 injured — and the picture is one of war.

So grave is the crisis that talk of all-parties conferences, committees and enhanced budgetary allocations does not have any impact. Why should it be taken seriously when no concrete steps are being taken to indicate that Islamabad means business? The government’s broken promises are now becoming embarrassing for the Baloch leadership that threw in its lot with the rulers at the centre. Some of the leaders have tried to resign but have been held back. Others have demonstrated public dissent at the way matters are being handled. Take the APC.

The PPP promised a dialogue to resolve Balochistan’s problems but has so far failed to honour its word. The last time the prime minister pledged to convene an APC was in May and it was supposed to be ‘within days’. Nothing has come of these assurances except for the establishment of a PPP committee headed by Senator Raza Rabbani to study earlier reports and formulate a common position.

The Rabbani report makes many worthwhile points. But will they help if they remain on paper as previously? There is also the question of Baloch participation in the APC. Not all nationalists are willing to attend. So strong is their distrust of Islamabad that they are no longer willing to be appeased by words. If Islamabad is serious about resolving the Balochistan problem, some confidence-building measures are in order.

Palpable steps to trace the missing people, release political prisoners and rein in the military presence in the province might help pave the way for a dialogue on political and economic issues. At the heart of the problem is the desire of the Baloch to control their own political destiny and natural resources. Is this really an unreasonable demand?