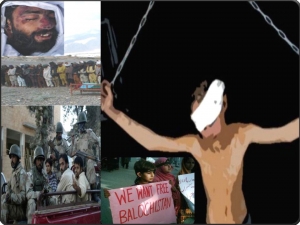 Occupied Balochistan: The Two bullet-riddled bodies that were found on Saturday in Bostan area of Pishin District have been identified as of Khan Mohammad Marri and Jahangir Baloch.

According to a Balochistan Levies official, some passers-by spotted the bodies in Killi Umerabad area and informed them. Initially, the officials shifted the bodies to the Pishin Civil Hospital where they could not be identified. The bodies bore multiple marks of torture and were partially mutilated, hospital sources said, adding that the bodies were later shifted to Quetta for identification.

On Sunday, 22/04/2012 the relatives of abducted Baloch rushed to the Hospital and identified the bodies as that of Khan Mohammad Marri, a resident of New Kahan Quetta and Jahangir Baloch. Sources reported that Jahangir Baloch was abducted on 25/03/2012 whereas Mr Marri was abducted during a pre-dawn raid on his house in New Kahan, Marri Baloch populated area near Quetta, on 26/03/2012.

According to eye-witnesses Khan Mohammad aka Khany Marri’s body had multiple markes of severe torture and electric shocks. Both of his ears for cut off, there were marks of cigarette burns everywhere on his body. His hands, legs, back, chest and other parts of body had signs of cuts from a short object and the cuts were filled with salt and paper. According the witnesses due a full burst of multiple bullets his head had been severed from his body.

The family of Khan Mohammad Marri had submitted a petition to Balochistan High Court against his abduction. The court had order the nearest Police Stations and officials of intelligence agencies to inform the Court about the whereabouts of Mr Marri during the next hearing on 24/04/2012. But, the Pakistani security agencies instead of producing him to the court have killed and dumped his body on Saturday (21-04-2012).

Two brothers abducted from Quetta: The mother of Mohammad Khan Marri and Mohammad Nabi Marri said that her both son were abducted by personnel of Pakistani intelligence on 11/04/2012 from Quetta. Both brothers are residents of Saryab Mills area of Quetta.

Giving further details she said that Mohammad Nabi has been abducted around 4 pm from Saryab area whereas his older brother Mohammad Khan was abducted two hours later (6 pm) from Jinnah Town, area of Quetta. She said “Both of my sons are in the custody of security agencies but I don’t know about their well-being and life.”

She said if her sons had committed any crime they must be handed over to police and produced before a court. She feared that her sons might also been killed and dumped like hundreds of other innocent Baloch by Pakistani security agencies. She appealed the Supreme Court of Pakistan and International Human Rights Organisation to take notice of the abduction of her children and play their due role for their safe and early release.

2 kidnapped in Khuzdar: According to Dailytime, a Pakistani English newspaper, Unidentified armed men kidnapped two people from Nal area of Khuzdar district on Sunday. Levies sources said the gunmen intercepted two men, Abdul Khaliq and Amir Bakhsh, near Ferozabad village of tehsil Nal, adding that the two men were taken to an undisclosed location. The Levies Force registered a case on complaint of relatives of the victims. Efforts were underway to trace out the whereabouts of the kidnapped men and apprehend the culprits.