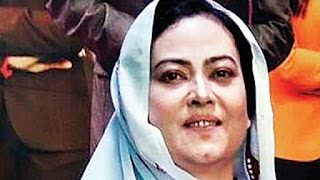 Prominent separatist leader Naela Quadri Baloch in her second visit to India, is laying the groundwork for a ‘government in exile' by building public consensus.

Weeks before Prime Minister Narendra Modi's August 15 Red Fort speech, when he mentioned human rights atrocities by Pakistan in Balochistan, prominent separatist leader Naela Quadri Baloch had been quietly meeting policy makers, retired military generals, intellectuals and rights groups, making a case for Indian intervention in Balochistan.
The feisty leader, in her second visit to India, is laying the groundwork for a ‘government in exile' by building public consensus. In a conversation with DNA's Shweta Desai, Quadri talks about how helping Balochistan will help India kill two birds with one stone – weaken Pakistan and its sponsoring of terrorism, and give a safe passage to Indian in Eurasia.
Ads by Revcontent
F.d. montör (49) tjänar nu 77 000 kr i månaden på trading!
Entreprenör Magazine
Secure Your Future & Start Making $1,008 Per Hour In Stockholm!
The Zulander Hack
Destined To Die So Painfully? These 14 Celebs Were Killed By Animals
Viral IQ

You faced trouble in getting a visa to India and had to miss an important seminar on Balochistan liberation in Delhi...

I applied for the visa from Kabul, where I have been staying for a year now. Normally, visa for India is cleared in three days. Mine got delayed, although I applied a month ago. They first said it was 'out of our mandate'. Later I heard foreign minister Sushma Swaraj had to intervene.

Since Modi's speech, the cause of Baloch liberation has caught public attention in India.

In my first visit, I went to different cities and met various rights groups, women's organisations, students groups and received a positive response. We have received support from the Rashtriya Swayamwevak Sangh (RSS) and Muslim organisations. There were lots of questions and counter-questions, but they all finally agreed that it is in India's interest to take up the cause of Balochistan liberation. As a first step, we got the moral intervention when PM Modi made the speech. We now need India's consensus for a 'government in exile'.

What case did you present?

Independent Balochistan will benefit India first in security. Weakening Pakistan will weaken the terrorism being sponsored from there. It will also help in containing China, which is developing the China-Pakistan Economic Corridor (CPEC) and prevent it from setting up a base in Indian Ocean. Thirdly, it will provide a safe and short passage to India in Eurasia, which it can get in Balochistan through the sea route. This is beneficial for India to get its resources, gas, oil from the region as its energy requirement will double by 2030.

But Balochistan has no say in any of the projects or policies of Iran, Pakistan or Afghanistan where the province is spread. So how will it help India?

Balochis are not helpless. India is developing the Chabahar port in Iran, which is in occupied Sistan Baloch province. We welcome India. Why is China so insecure and not able to move freely in the province for its CPEC project? (Armed Baloch insurgents attack Chinese employees in Balochistan as it opposes Pakistan's occupation and Chinese involvement.) We don't want the same to happen to Indian nationals in Chabahar as we love and respect India.

What do you expect from India in the development of Chabahar port?

We want India to emphasise to Iran and Afghanistan to protect the human rights of Baloch nationals living in their region. Iranian forces have already started killing Baloch people and displacing villages for the development of ports, like the ones in Kumb-Moradabad and Roshanabad.
Pakistan's development of Gwadar port for China has resulted in the genocide of our people and now Iranians are doing the same in Chabahar. India can't criticise human rights atrocities against Balochs in Pakistan and ignore those being committed in Iran. It needs to take a stand.

You are here to form a government in exile. What is its mechanism?

This will be a representative government for 40 million Baloch nationals all over the world. Our liberation movement has trained us in creating democratic political structures like the Baloch Students Organisation, which has numerous units. We will ask the Baloch people to follow this pattern and elect representatives/councillors and send them to India. They will be facilitated in India for a National Council Session here. They will create a constitution; adopt a flag and national anthem, which will be recognised by the council. There will be elections among councillors, after which a cabinet will be formed. We want this process to be autonomous by the Balochs, for the Balochs and of the Balochs and no interference from India. We want India to provide moral, logistical support and resources to create this government.
http://www.dnaindia.com/india/interview-india-needs-to-support-baloch-rights-in-chabahar-as-well-naela-quadri-baloch-2264542
Posted by Mohim Baloch at Wednesday, October 26, 2016