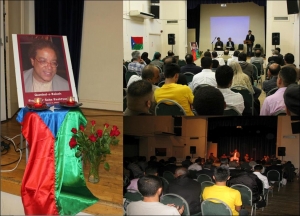 The event comprised of three sessions: In the beginning after a minute of silence in the memory of Baloch National Martyrs, Dr Badal Khan Baloch, who had come from Italy, presented his talk about the role of singers in society, Faiz Baluch read a message of Baloch leader Hyrbyair Marri and Sohaib Mengal talked about life and struggle for Shaheed Ghulam Hussain (Saba Dashtyari Baloch. In the second half of the event Shahab Baloch, Ismael Mumtaz Baloch and Mahnaaz Baloch read Balochi poetry whereas Saeed Borhanzahi Baloch sang revolutionary songs from poetry of Mir Gull Khan Nasir. The final part of the event consisted of mix songs and Baloch youth played traditional Balochi Dhress or Dochaapi.

Dr Badal Khan presented his talked titled “Singing the soul of Nation: The role of singers in Baloch society”. He compared the revolutionary singers and songs of other Nations to the Balochi revolutionary poetry and explained the importance of music as a medium to encourage the freedom movement throughout world. He compared Balochi revolutionary songs with Italian song “bella ciao” and songs of other nations that talk of freedom and inspire people to stand up for their rights or never let the candle of liberation struggle die.

Faiz Baluch read the message of patriotic Baloch leader, Hairbiyar Marri, who couldn’t participate in the event due to absence from the country. Mr Marri in his message said that Baloch were owner of a rich culture, deep rooted language valuable traditions. Ancestors of Baloch have paid ultimate price to uphold the Baloch culture despite the efforts of occupying states to dilute and distort Baloch way of life and impose their alien languages and culture on Baloch people.

The message read “Patriot Balochs have sacrificed their lives to preserve the Baloch culture and traditions. Brave Baloch leaders like Mir Hammal Baloch, Prince Abdul Karim, Nawab Nauroz Khan, Ghulam Mohammad Baloch and countless others, all had upheld the Baloch culture of resistance in defence of their motherland – they fought against foreign invaders including the protégées, Mongols, the British, Punjabi and Persians to keep them off Baloch land and prevented them from polluting the Baloch Culture.”

In his message Mr Marri revealed the anti Balochi culture behaviours of the occupying forces and said that the persecution of Baloch activists for simply saying the words ‘Baloch’ ‘Balochi’ and ‘Balochistan’ indicate the scale of the institutional violence of denying an entire people the right to speak their language and express their true identity. “On several occasions people have been arrested and humiliated for wearing Baloch National Dress and growing breads or folding those in Balochi style, especially in Marri and Bugti regions. Moustaches and beard of several Baloch have been forcefully shaved by Pakistani officials in a bid to disgrace them and make them look like Punjabi occupiers.”

Hyrbyair Marri’s message emphasised that Baloch give priority to their language and culture like other nations of world and work hard to preserve and promote Balochi language, culture and traditions. He said genuine Balochi language writers and intellectuals should be helped and encouraged.

Mr Marri in his message also paid rich tributes to shaheed Saba Dashtyari Baloch – “Since this event is also dedicated to Shaheed Saba Dashtyari, I would like to pay my deepest respects to the Qandeel-e-Baloch. He was one of the very bold and honest men of Baloch Nation. He has rightly been given the Title of Teacher of Freedom, by Baloch students, because he was perhaps the only Baloch scholar and professor who were very clear about the independence of Balochistan. The enemy was afraid of his knowledge, dedication and righteousness. The enemy knew that Saba’s pen and knowledge, which he was passing on to other, was more sophisticated than the power of gun. That is the only reason that I can think which casted Saba his life.”

Hyrbyair Marri in his message thanked the Organiser of the cultural and musical event, the guests who travelled from other countries to participate in the event and all others who have come from different parts of United Kingdom to attend the event.

Sohaib Mengal, the International representative of BSO-A, Paid glowing tribute to Shaheed Saba Dashtyari and talked about the life and struggle of, Qandeel-e-Baloch, he ended his speech with the following emotional and inspirational sentences “Ustad [Teacher] we miss you. We miss that humble person in his own classical attire who was not less than an angel. Ustad we miss the way you smiled whenever you saw your students. We miss that warm welcome Ustad. We miss the way you kissed your students whenever you met them irrespective of whether you personally knew them or not. Ustad we miss those chats we used to have in the cafeteria of Balochistan University where you used to treat everyone of us as your friends. We miss those discussions where we used to discuss everything. Dear Ustad Saba we miss those difficult Balochi words that you used, and we also miss those long definitions that would tell us when we used to ask the meanings of those difficult words. Ustad you were not an individual but an institution.

“Ustad we miss your teachings But Ustad let us also tell you a good news that your students are fighting the tyranny with full zeal and power. The uncountable brutalities, enforced disappearances and murders could not tremble the cognizant students that you had equipped during your lifetime.

“Ustad they have killed many of those who used to sit with you in the cafeteria but they couldn’t break them. The thousands that you had equipped with ideologies are still fighting the enemies and due to your earnest teachings they are increasing in numbers with each day. Dear Ustad our enemy has lost it at many fronts and it is not far when your students will bring the enemy to the justice and probe them for the brutalities including your heart-breaking murder. Ustad you were unique and irreplaceable but your teachings are always there with us and with strength of these teachings we will defeat all the intruders and occupiers.” Read the full speech of Sohaib Mengal here: http://raasth.com/2012/06/03/ustad-we-miss-you/

Hashim Baloch was the stage secretary of the event whereas International Voice for Baloch Missing Persons (UK) had made arrangement for food and drinks.

To see the pictures of the event [CLICK HERE]
For videos of songs and speech visit: http://www.youtube.com/user/Kohdil
http://www.balochwarna.com/modules/news/article.php?storyid=3560
Posted by Mohim Baloch at Thursday, June 07, 2012